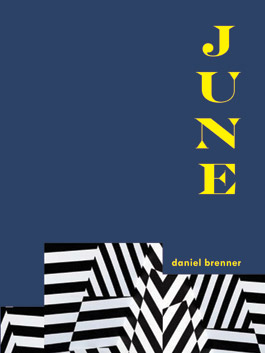 June takes up the whirlpooling, epic project of Brenner’s prizewinning debut The Stupefying Flashbulbs. Narrative emerges despite the “pleasurable obstacles” (as one reviewer called them) of these poems, which, in hallucinatory, luminous, yet spare verbiage trace the obscure appearances of “perfumed people,” pioneers all—including one Xi An, a “guardian of paradise”—as they weather a flood, butchery, and “blistering synthesis.”

“‘Will June never come/ Has June come already.’ The poem looks forward and backward from an edge of civilization into which a world-destroying flood is coming, or has come. Apocalypse? Surprisingly, no. The key is that these poems are written from innocence, not experience. They do not mourn or try to recover a lost world; rather these are the ambivalent voices of pioneers who long for the excitement of life in a lawless country. The music and density of their language remind me of Ceravolo, and the happenings make me think of Cather, although many of the references seem to be Eastern rather than Western. These body snatchers read as the Stevenson kind, who trade in corpses, rather than the pod people kind.”
—Aaron Kunin