Fence is committed to publishing from the outside and the inside of established communities of writing, seeking always to interrogate, collaborate with, and bedevil all the systems that bring new writing to light.

A robust history of FENCE awaits you below on this page, from initial spark as an idea to its earliest days as a publisher.

As a non-profit, Fence is mandated to make decisions outside of the requirements of market force or capital concern, and only in keeping with its mission:

to maintain a dedicated venue for writing and art that bears the clear variant mark of the individual’s response to their context;

and to make that venue accessible to as many, and as widely, as possible so that this work can reach others, that they may be fully aware of how much is possible in writing and art;

such that Fence publishes almost entirely from its unsolicited submissions;

and is committed to publishing the literature and art of queer writers and writers of color.

In continuous publication since 1998, Fence is a biannual print journal of poetry, fiction, art, and criticism that redefines the terms of accessibility by publishing challenging writing distinguished by idiosyncrasy and intelligence rather than by allegiance with camps, schools, or cliques.

Fence is edited by

editors of Fence past

Fence is a program of Fence Magazine, Incorporated, a nonprofit organization in the state of New York. Fence Magazine, Inc. enjoys the support of the National Endowment of the Arts and the New York State Council on the Arts. Fence is supported by membership, subscription revenue, and the sale of our books.

Launched in 2001, Fence Books publishes poetry, fiction, and critical texts and anthologies, and prioritizes sustained support for its authors, many of whom come to us through our book contests and then go on to publish second, third, fourth books.

To keep informed about contests and their results, sign up for our newsletter.

You can submit to our book prizes during their submission windows.

Fence Books is scaled down through 2021 while the editor is committed to public service in her home city. During this time we are publishing The Ottoline Prize, and seeking fiscal sponsorship for our two other book prizes: The Fence Modern Poets Series and the Fence Modern Prize in Prose.

The Fence Modern Poets Series is open to poets of any gender or gender identity and at any stage of career, and offers a one thousand dollar cash prize in addition to book publication, as well as a residency at Eliot House, in Gloucester, MA. Past winners include Joyelle McSweeney, Prageeta Sharma, Paul Legault, and Steven Alvarez.

The Ottoline Prize, formerly incarnated as the Motherwell Prize and the Alberta Prize, is an annual series, generously endowed by Jennifer S. Epstein, which offers publication to a second book of poems or greater by a woman, a five thousand dollar cash prize, and a residency at Eliot House, in Gloucester, MA. Past winners include Lesle Lewis, Chelsey Minnis, Harmony Holiday, Sasha Steensen, Laura Sims, and Ariana Reines.

Fence Books is a program of Fence Magazine, Incorporated, a nonprofit organization in the state of New York. Fence Magazine, Inc. enjoys the support of the National Endowment of the Arts and the New York State Council on the Arts. Fence is supported by membership, subscription revenue, and the sale of our books.

. . . about the status of Submissions

. . . about carrying Fence in your store

. . . about library acquisition of Fence

Born in 2016 Fence Digital is an electronic imprint of Fence Books and publishes multimedia poetry, fiction, and hybrid image texts that reinvest digitization with materiality, treating the screen as a skin. This extends Fence's mission to redefine the terms of accessibility to contemporary art writing by sharing it within its own variousness. Fence Digital believes that idiosyncratic and alternative writing should be read wherever you are, whomever you are with, and on any device you can hold. It is Fence Digital's mission to publish objects that relate systemically and formally to their media and that collaborate with the newfangled modes of dissemination and representation available in digital publishing environments. Fence Digital is edited by James Belflower.

Afrosonics/ Mythscience is a suite of interdependent projects spearheaded by Harmony Holiday in conjunction with Fence Books, and including a podcast  and digital archive of diasporic oratory , a living physical archive of uncollected jazz poetics lps soon to be housed at the Poetic Research Bureau in Los Angeles, and a series of live and digital events called The Mingus School, through which we combine archival practice with ideas rooted in the tradition of collective improvisation and just dig into and discuss and show our archives. Harmony is also working on the first ever map of black archives, because we need to know where our cultural capital ends up and why, and reissues of out-of-print material from the jazz poetics archive so that they can be enjoyed by a wider audience.

Launched in 2002--one of the earliest sites for poetry criticism on the web--and published almost continuously since then, The Constant Critic was formulated to answer a lack of timely and trustworthy long-form critical attention to new books of poetry from small and large presses. Newly reformulated in 2018 with editors Anthony Madrid and Tyrone Williams, The Constant Critic continues to apply a theory of trust and time to its attention to the current publishing industry and the new books it produces.

A HISTORY OF FENCE

Including Essays by FENCE Editors

and Selected Articles and Interviews

In 2009, FENCE published a two-volume anthology entitled A BEST OF FENCE: THE FIRST NINE YEARS. They are available, Vol. 1 and Vol. 2, through Small Press Distribution. 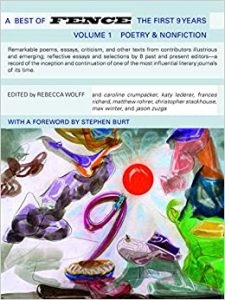 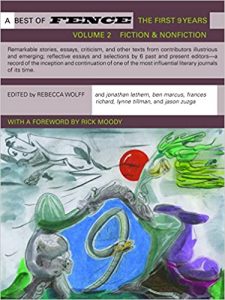 The editors of FENCE up to that point in time contributed essays about their experiences working on the magazine, all of which you can link to below and read, along with the FENCE MANIFESTO OF 1997 which you may read by clicking on it here:

The marketing copy that appears on SPD with each volume reads, approximately, “A historical document so significant it requires two volumes. In addition to each editor selecting for inclusion their favorite pieces published during their tenure, thus presenting an eclectic compendium of poetry, short fiction, criticism, and creative nonfiction, much of it by writers who appeared in Fence at the beginning of careers. These volumes include reflective essays [all of which you can now access below] by editors on their experiences with selected texts, with authors, with the magazine as a collective, and with their own editorial identities, and serves as an indispensable record of the inception and continuation of one of the most influential literary journals of its time." Again, these essays are available immediately following this brief and rather over-simplified introduction.

FENCE's early years were uniquely tumultuous and thrilling.  At the time, in 1998, from my point of view, as I moved between what felt like opposing citadels, the poetry world had grown firmly divided into two camps—something not unusual for any of the arts over the course of their histories—with some poets dedicated to building on tradition and narrative, prioritizing accessibility and communion with readers and other poets who wanted to break from tradition, from the comfort of the familiar and provide challenging encounters with and about language for readers. There was much discussion and invective over whose poetry was the correct poetry, the ethically sound poetry, in terms of form and content. FENCE was pivotal in opening a space between what Ron Silliman has called the "Post-Avant" and "The School of Quietude." 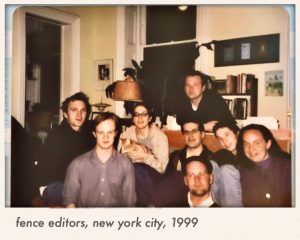 FENCE was initially a kind of salon de refusés—a place—both in the physical journal and in the roving parties and performances—where those who didn't fit into either camp might find a place to gather. A place itself for poetry without a predetermined agenda or dogma, simply open to deep play—in the Winnicottian sense—language of all kinds and modes opportunities for various collaborations and experiences between poet and reader. Contributors were not asked to supply a self-promoting biographical note showing who had the more impressive list of publications, but instead were asked to provide a note about what they were reading and might recommend.

As well, FENCE, through its pages and events, put members of both camps—their combative stances a product of polemic, politics, coterie, both sides believing they were on the side that cared most about readers—into a place where they might actually meet, read one another’s work, converse. After such intercourse, the world of poetry was fundamentally changed. FENCE was both instigator and staging ground. The hybridizations and unexpected influences and encounters have since vastly diminished the hostilities that once were deeply felt depending on which camp one was aligned to. I believe that, with the atmosphere less charged by a need to choose allegiances and demonstrate loyalty, a number of internalized constraints lifted from emerging writers.

Here are the cover, Table of Contents, and Editor’s Note of the first issue: 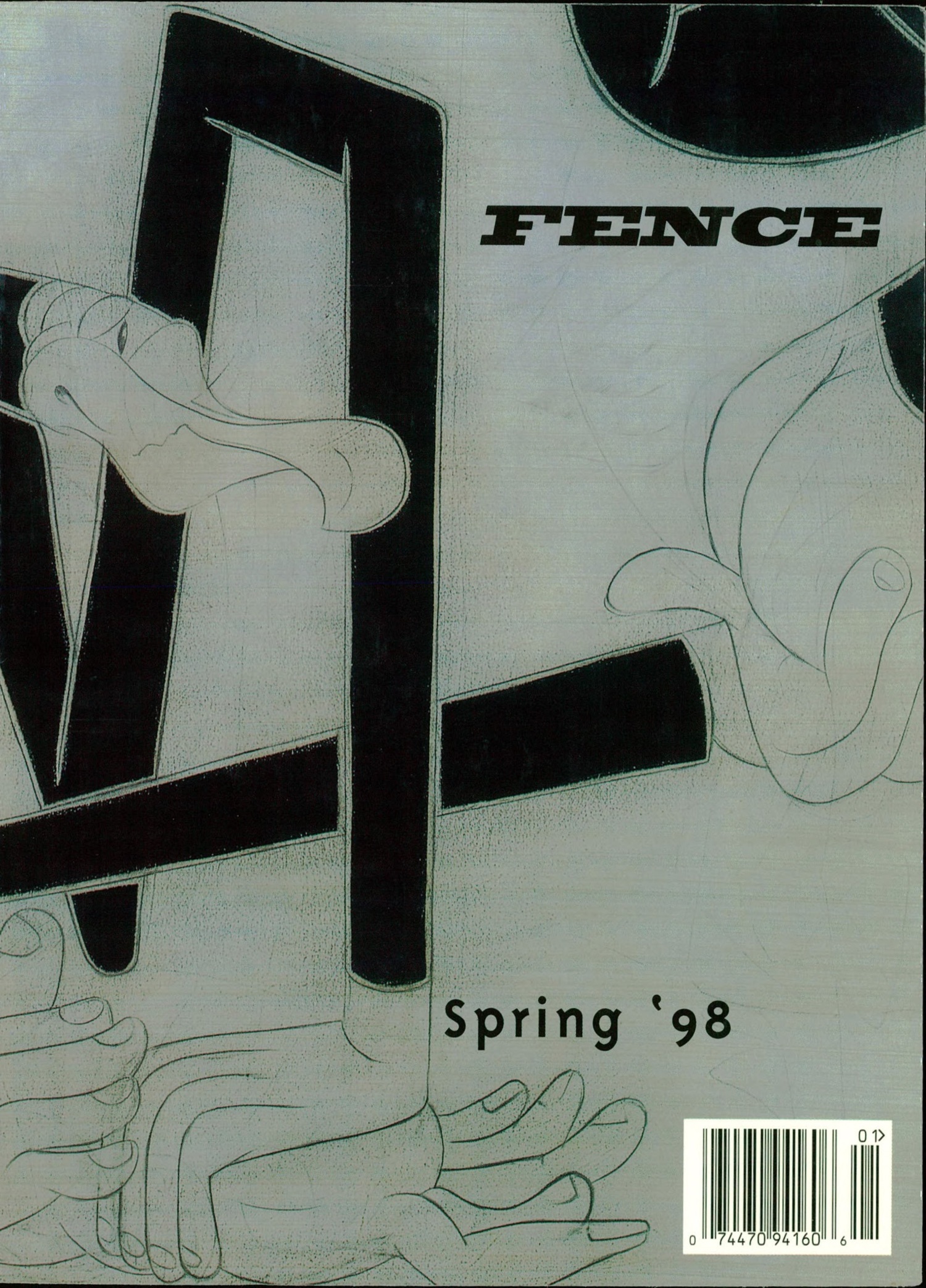 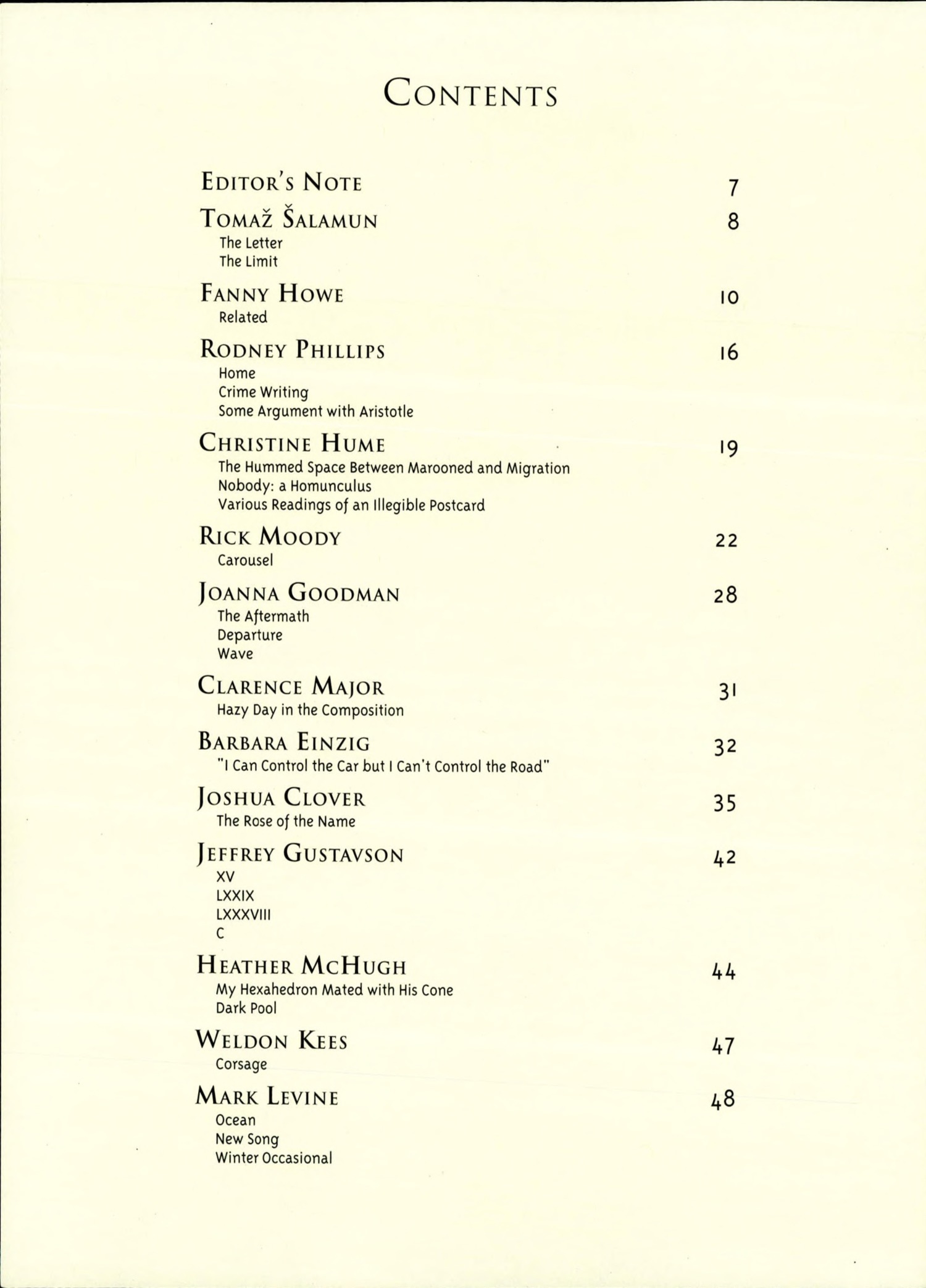 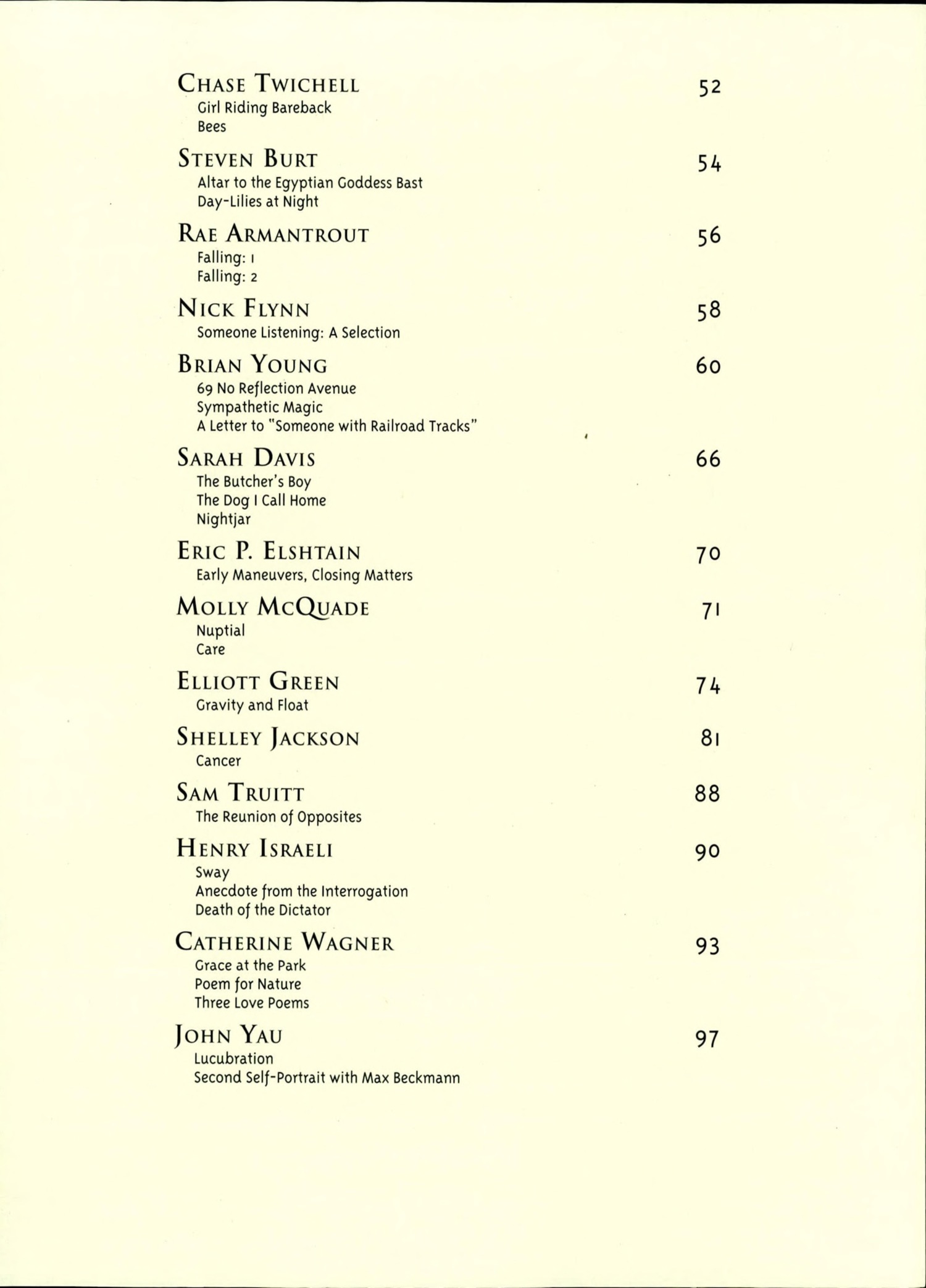 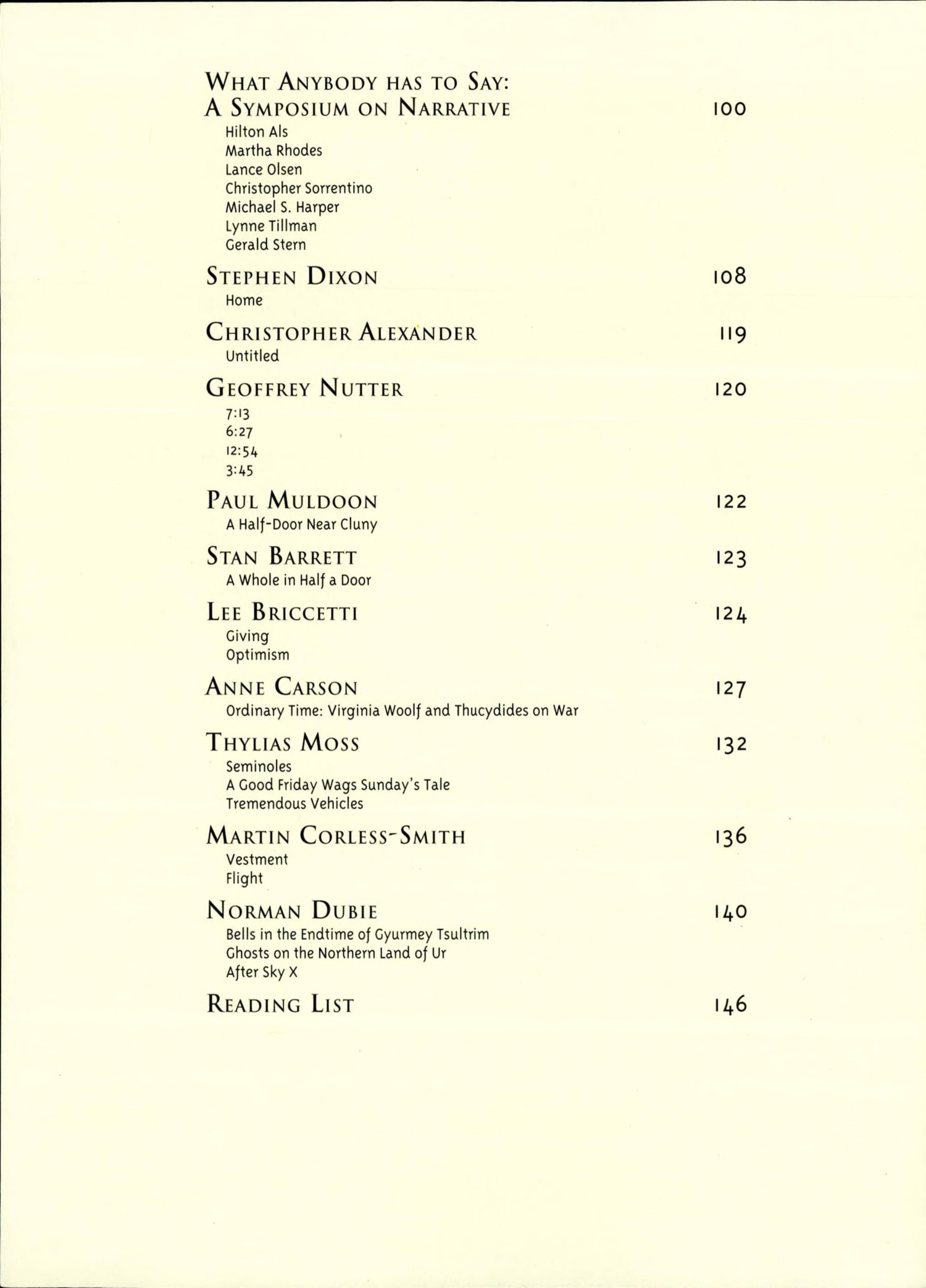 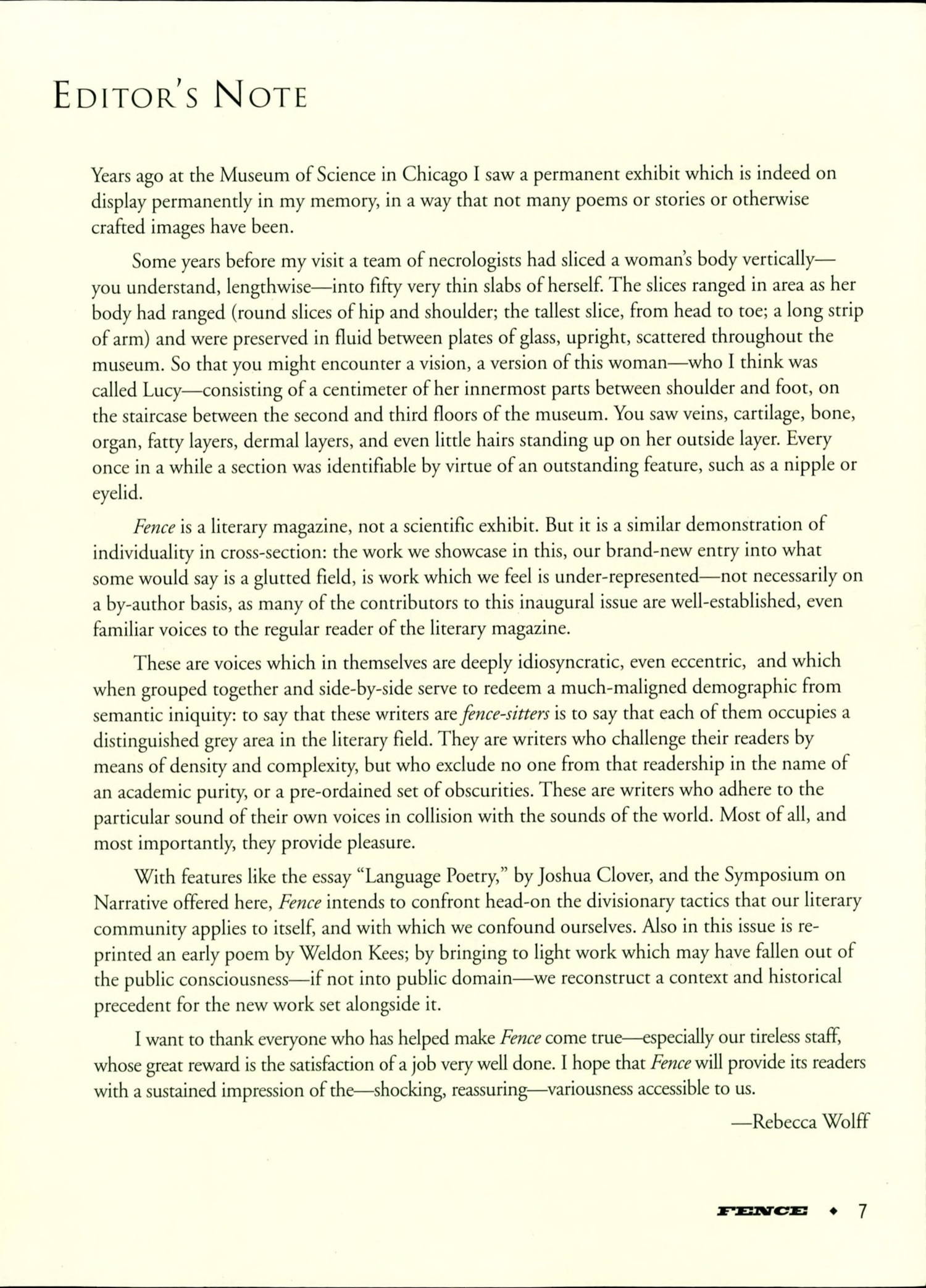 Poetry never stands still. Controversies erupted. Further problems and differences have come forward. Amid the elliptical, the playful, the collaged, the conceptual, the pop gesture, the minimal, the expansive, was a movement away from the identity of any speaker of a poem as identical to the poet’s “authentic” subjective speaking self, poems foregrounded any speaking “self” reflexively, ironically, or dismissed it as deceptive artifice. However, such a tendency warps under pressure when confronted with urgent poetry written by poets bearing distinctly socially formed, enforced, and marked identities shaped by racial discrimination, queerness, economic status, or multi-lingual heritage. Take, for example, Cathy Park Hong's indispensable essay "Delusions of Whiteness in the Avant-Garde," published back in 2015 in the journal Lana Turner. An unmarked default "proper" English, as medium for the making of poems or the ground from which poems deviate, can no longer be taken for granted. We must pay close attention to those poets whose use of English resonates with multifarious identity, politics, poetics, ecologies, polylinguality—all language's supple ambiguities and resonances. At the same time, welcoming anything else that tickles the reader's mind in a way that provides challenge and sustenance to any self's available language, ever in flux.

FENCE remains committed to presenting to the public writing from across the genres that we hope will provide readers with textual delight, juicy juxtaposition, and innovative provocation. This began through the biannual print journal, begun in 1998, expanded through the FENCE Books series, which began in 2000. It has further continued to grow through FENCE Digital, live on the internet since 2019, and through FENCE podcast begun in 2020. As it did from its inception—as you will read about in detail in the accounts below—FENCE will work to continue, as much as is possible, to avoid any preconceptions, prescriptions, or limitations on what is best or possible in the literary arts.

Rebecca Wolff  "Weird Is an Emotion"

Stephanie Burt "FENCE, or, the Happy Return of the Modernist Alligator"

Max Winter, Poetry Editor: "Being an Oral History of My Work with and for FENCE: 1998 to the Present"

Christopher Stackhouse, Poery Editor:  "On Being an Editor for FENCE"

The Story of FENCE by Rebecca Wolff, July 2000

The Resistible Rise of Fence Enterprises by Steve Evans, January 2001

Responses to “The Resistible Rise of Fence Enterprises” 2001-

What does FENCE mean? by Johannes Goransson, August 24, 2011

'Fence' Has Been Reconfiguring the Literary Landscape for 15 Years by Blake Butler, May 30 2013

Rebecca Wolff Gets Personal With the Program in New Issue of Fence, December 2013

"I Have Made the World Ready For Me" Interview with Rebecca Wolff—Editor by Jessica Ullian, November 2015

Mothers in Publishing: Changing the Literary Landscape, May 7, 2016

On putting thoughts into action: From a conversation with Annie Bielski, December 17, 2019 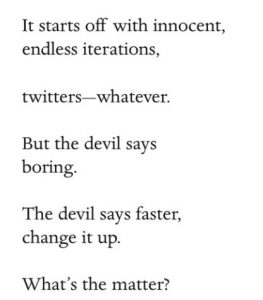