The caricature falls apart. Released in self-propelled
socks, I thump arrhythmia on the left ventricle
of Babylon, where I gloss the harshness of means with the innocence of ends.

The toilet seat from the supermarket is perfect.
On its wreckage a splendid new world will arise,
or a club café for hipsters; for things like that

it’s really worth running up a debt. The toilet seat from the supermarket
is perfect. There are dietary supplements outside the law,
which enable manned flights to any of the planets.

The best thing you can do with your life is to open
your own restaurant or pizzeria! Show me your crowbar,
and I’ll tell you how left-wing you are. 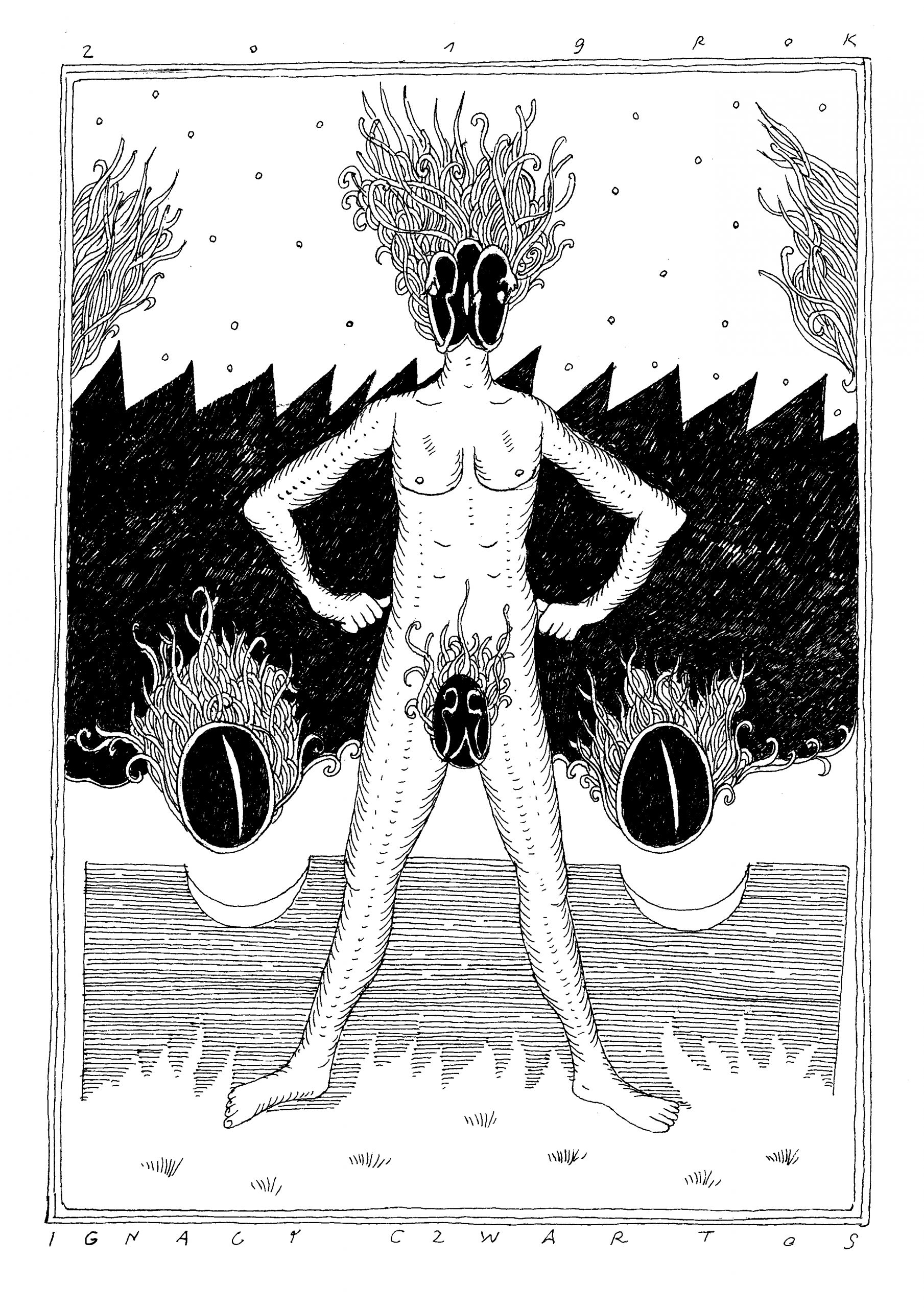 in line for the urinal.
Where there’s a will, there’s no harm
– two long-haired youths
in black band shirts
with picturesque illegible logotype
emerge from the darkness like Coma:
wearing an expression peculiar to Morpheus
on their faces, they permit me to freely choose
between a blue and sky-blue pill.

So I gulp down 2QC, a dietary supplement,
against becoming a leftwing motherfucker
and I see how each dismissed shipyard worker
starts his own shipyard,
and armed with a sling-shot canoe
– the rising tide lifts all boats –
with the Invisible Hand brings
past customs to the Belarusian market
a flat, super-absorbent mop for navigating the open seas.

Stung with freedom/woozy with freedom
I’m indolently coming back to myself in bed
– I delicately finger the telephone produced by capital,
I look through my wallet as diversified as the universe.
The ideas of Ayn Rand slowly slide down a pant leg.

A Catholic Pole Writes a Denunciation of Pussy-Man

in this country beloved especially by many
and by God God will not forsake us or the need
for revolutionary vigilance in youth the leftist
of Bolshevik persuasion has notoriously drunk himself
senseless and although all of you aren’t hopeless
he’s lost his hope in returning to Lwów does anyone
consider his anti-Polish commentaries seriously
? in my view the pronouncements of this person
should be taken care of by law enforcement agencies charged with homo sovieticus
lemingus et levakus how much bloodshed
and significant sum of money will it cost
this is no longer folly but a final call for him to get
to a psychiatric ward of course
he could in his hospital gown carry on
interviews but at least the viewers in view
of place of transmission and the wise man’s garb
individuals capable of very able and upright thinking
at a high level of abstraction can manage
in such cases grossly primitive derivations
the completely incompetent as well as embarrassingly dimwitted
and intellectually poor person the procedure
to take his Polish citizenship away from him must commence

Changing of the Guard: A Bedtime Story for the City of Poznań

Last night
unknown culprits
set up in my garden
a statue of Christ the King.

It’s roughly more than 5 meters tall
– massive, brown, more abiding than bronze,
with a face resembling
that of the statute of the Polish pope.

I should be thankful
to the unknown culprits,
but on account of the statue,
I have a noggin like Psyduck’s.

I could paint it with a random color
were it not for the conservation officer.

I could dry laundry on it
were it not for the conservation officer.

With my brother-in-law, I could carry it to the basement,
but that offends religious sensitivity.

One day I’ll buy myself a motorized grass trimmer
from Demon, with a 5.2 h.p. engine,
managing splendidly well where
lawn mowers reach the limits of their possibility,
with an anti-vibrational system that reduces shaking,
insuring maximal comfort for mowing.

One day I’ll buy myself a motorized grass trimmer
and hang it on the cross.

Translated from the Polish by Lynn Suh.

TOMASZ BĄK (born 1991) is a schizophrenic collective. He is the author of three books of poetry; a long poem, Bailout (WBPiCAK, 2019); and a one-act play, Katedra [Cathedral] (Wydawnictwo papierwdole, 2019). He is a laureate of the Silesius Wrocław Poetry Prize's Best Debut Award for his collection Kanada [Canada] (WBPiCAK, 2011), the Poznań Literary Prize's Stanisław Barańczak Stypendium for his collection Utylizacja. Pęta miast [Reuse: Urban Shackles] (WBPiCAK, 2018) and the Gdynia Literary Prize (Poetry) for his long poem Bailout. He lives in Tomaszów Mazowiecki, Poland.

IGNACY CZWARTOS (born 1966) studied at Adam Mickiewicz University's Department of Art Education in Kalisz. He obtained his diploma in 1993 in the studio of Tadeusz Wolański. In 1995, he co-founded the OTWARTA PRACOWNIA [Open Workshop] Association and Gallery. Since January 2006, he has been the president of its board of management. Apart from painting, he draws illustrations for books and periodicals. In 2019, he was awarded the Silver Medal for Merit to Culture - Gloria Artis. He lives and works in Krakow.