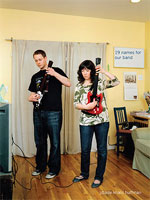 Inasmuch as rock n’ roll belongs yet to the young, this is a young book. Its debut concerns are those of the youth culture inasmuch as when we are young we are closer to home, to origin, to the primal disjunctions supplied by our gaps/leaps in understanding. “This is called angled feet this is called/ separate parts of faces/ this is about body parts it’s called/ wide-eyed radio hour[.]” Huffman’s poems enact a sweet mojo on the youthful territory of the hometown, of the high school, of the TV-watching-music-listening experience, and we find ourselves in the “Diamond Zones,” where “Rehabilitation of/ the burned parent// in a rowboat/ a knock-kneed// the mind tries/ to find speaking[.]” A series of sporadically appearing poems with the title “Very Early in the Life of Jerome” acts as a placeholder in the reading mind for these territories, enacted as they are in the comfortable vernacular of immediate, casual speech: “When I am fourteen on the diving board, please start by saying I am fifteen and deny you were ever there.” Other poems allow for a steeper climb on the merry-go-round of associative logic, by which we are given to understand this poet’s effortless commitment to literary surfaces. “What intimate, white center// of competing flames, starling/ who was afraid that day// for what life, what has only// meant a drum contained/ whole order described in titles// third in order, as was tardy again// when in, without ending.”

“Jibade-Khalil Huffman issues electric lines interrupted by bursts of static. His poems are hazardous. I’d say be careful but you won’t want to be.”
—Luc Sante

“With their syntactic sleight-of-hand, these poems trouble the space between history and nostalgia. This is a seriously playful and arresting new voice.”
—Tracy K. Smith