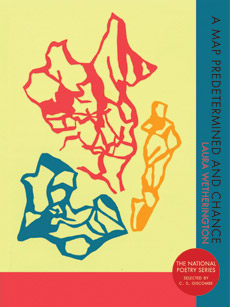 Strong, cathartic language on subjects ranging as wide as orgasm, as deep as music, as timely as place, these debut poems speak clearly to history both personal and liberatory.

“A Map Predetermined and Chance rises from several sources (the languages of sexuality, descriptions of D-Day, discerning looks at the stage business of  Voyage d’ Hiver, others) but a reader would do well to take the book’s initial statement—’there is no narrator, no barrier’—seriously; and ought to take the next one even more seriously for its being put out in Q&A form and referencing the function of the material—here, the author (observing that the sentence at hand ‘does not rhyme’) asks, ‘What does it do?’ And answers in the next sentence—’It reads like a primer; my primer / is a desire: see my desire get / fingered.’ Identified, pressed, touched ‘repeatedly or restlessly,’ pleasured, hankered after, pointed at with the finger. In this book Laura Wetherington means everything, all of everything. ‘The map is not the territory,’ said Alfred Korzybski. Fair enough, but  A Map Predetermined and Chance does yet other kinds of work: it goes fearlessly to both refer to and build other structures—and places—of knowledge than the territory that salesmen are obligated to know. Perhaps Wetherington’s map is the territory. ‘All I want is universe,’ she winks. Music is in it—she writes, ‘beehive she bop mishap / the syllables go la / la da dee / go long.’ Time is in it, too—certain days, annotations, a deceptively endless pastoral present. ‘Time was and time wasn’t,’ she writes; and then, ‘Time wasn’t. That’s what it was.’  It will git you—as Ralph Ellison noted— an’ it won’t.

Every map tells a story? Maybe the trouble with that idea is the implicit storyteller, the figure of barrier, a circumstance or principle of exclusion. (A salesman?) A Map Predetermined and Chance has its sources but it is not the pitch or story of desire; rather, the book fingers the grains of some places where such a thing as desire (its wants and wouldbe’s, its immemorials) might have stopped by or found (or taken) momentary form—you, that, the clapping gyre of me; or ‘a memory expansive / as my own,’ the pirated language of —’s escape, schoolyard banter of the technology that can compress a cremated body into a diamond. ‘This this,’ Laura Wetherington says. Her book is a dangling down atlas—sly, elusive and allusive, engaged, multiple.  This, this. Like time, it fails to conclude.”
—C. S. Giscombe,  National Poetry Series judge