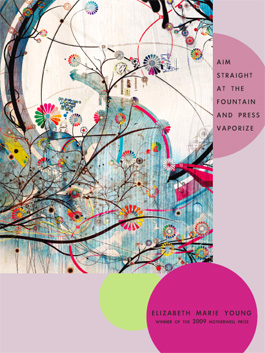 Winner of the 2009 Motherwell Prize

Let us declare that one of the tasks of poetry is to linguisticate—to create refulgent and extraordinary language-worlds and rule over them with wit and felicity. This is the achievement of the luminous, quick-hearted, luscious poems in Liz Young’s brilliant debut volume. It is an enormous achievement—the creation of language-lavish landscapes in which the imagination is never exhausted. This volume is a guide to alternative word-worlds—it is their index. those who read those worlds will learn a great deal about this one—and the next.
—Lyn Hejinian

An exuberant skeptic, Elizabeth Marie Young writes in the infidel hope that writing itself can create worlds. These hilariously erudite prose poems are cosmologies—miniature, ever-expanding universes crammed with over-active particulars. They are interactive environments, kaleidoscopic and incorrigibly changeable, in which competing impulses toward cerebral austerity and luxuriant beauty battle it out. These poems crystallize into radiant geometries even as they threaten to self-destruct: distinctly utopian, pulsing with the defiant exuberance of drag and disco and steeped in the lemonade oceans of Charles Fourier. Antiquity lingers as a locus of incomprehensibility, startling us into novelty. Elizabeth Marie Young coins new myths, drawing in classical material only to see how it looks wrestling in the mud with surfers, yogis, and cyborgs.