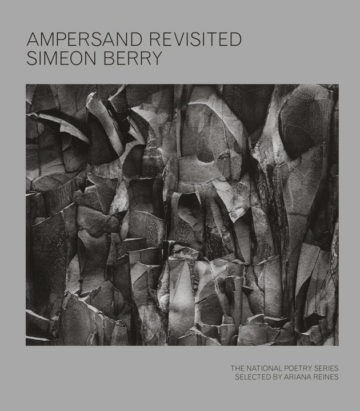 Consisting of three long poems, Ampersand Revisited traces the legacy of a father drawn toward the occult and a mother immured in a personality disorder through the experiential wisdom of a neurotic Connecticut teenager. Circumscribed by a growing awareness of erotic consequence, the speaker struggles to navigate a spiritual and anatomical landscape that is equal parts lyrical and lurid. A deft balancing act between sublimation and the sublime, Simeon Berry’s narrative moves lithely through open prose forms, illuminating each psychic Venn diagram as he untangles illness from intuitive information, seeking the troubling crux at the heart of the ineffable. Selected by Ariana Reines (Coeur de Lion, Mercury) for The National Poetry Series.

“Ampersand Revisited is an inverted Odyssey, etched in searing—downright entomological—precision, tracking a father’s retreat from occultism through the wounded meshwork of the son’s very grammar.  Magical powers—ancient craftiness—might make the epic hero, but they are an impossible burden to live with in the Manichean, and very American, riddle that forges Ampersand’s poeisis. Crossed & re-crossed with sex & suicide, school & mystery school, the book is the vivid, laconic gloss of the ravages of mystical knowing.”
—ARIANA REINES