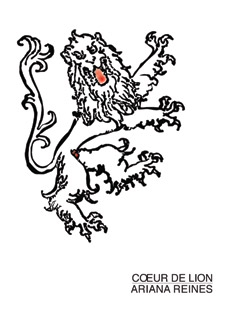 Coeur de Lion is a book-length epistolary love poem that directly addresses a recently lost “you”—in accessible tones yet with extreme erudition and fierce intellect—but that also directly addresses the work of poetic address, how it shifts when the you shifts from a literal recipient, through loss, to poetry itself: art form, tradition; soul-catching medium. It’s libidinal, heartful, hot with the memory of what was libidinal and heartfelt and hot. It’s also a cult classic: self-published in 2007 and available now to an audience who will recognize the deep influence it has had on contemporary poets and poetry.

“Lines that make me want to have sex on the moon.” —Thurston Moore

“Scathing and meek, furious and thoughtful, reckless and careful, brave and frightened, Coeur de Lion is something you’ve never seen before that you already know by heart.” —Daniel Handler aka Lemony Snicket

“In Coeur de Lion the erotics of power and powerlessness are not opposites—they flirt and morph and clash into a brilliant blast of poetic energy. I saw Ariana read from this book at UC Berkeley, and the walls of the academy rumbled. I fucking love this book.” —Dodie Bellamy

“At the time we thought Coeur de Lion a more comfortable book than The Cow, for it is, after all, a ‘love poem’ no matter how perverse, but as I look at it again I’m struck by how fierce its valences are, how intransigent its anti-nationalism. Already I think of Reines’ work in art as dividing, like Picasso’s, into periods, and if this is the rose period it is also the time in which blood rained down on the peoples’ heads. Asked for the history of a certain sort of public sex, I mumble that there was Zabriskie Point, and then there was Peter Hujar, and there was Cɶur de Lion.” —Kevin Killian