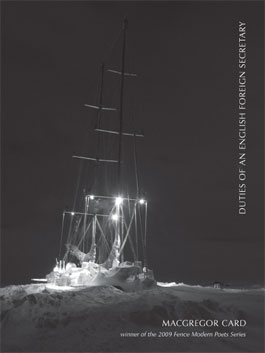 When do “hermit” and “maudit” not rhyme? When you’re a fellow traveler in Macgregor Card’s global community of canny songsters. Card’s deft, lushly Romantic speaker has “friends in London.” No, he’s got “friends in London,” and the emphasis makes all the difference in this worldly debut. These poems are inexhaustibly sophisticated, not just because of the occasional mention of England and the English, or other European citizenry, which functions as a kind of breezy, fond wave to literary tradition, but because of its surefootedness in the terrain of pastoral/personal nostalgia: the longing for that which is a putative past, a past no one lived through. This is a sublime nonsensical balladry, a songbook of meditations on hospitality, fidelity, friendship, regret and the lyric, with a stylistic nod to the late Spasmodic Sydney Dobell, out of print since 1875. Here the song drives the engine and finds brilliant solutions.

Macgregor Card is a poet and bibliographer living in Brooklyn. He was co-editor of The Germ for its ten-year run (archives at www.germspot.blogspot.com). With Olivier Brossard he is editing an anthology of the New York School. Recent poems have appeared in The Brooklyn Rail, Aufgabe, The Recluse, KGB Lit, Fence and Best American Poetry.