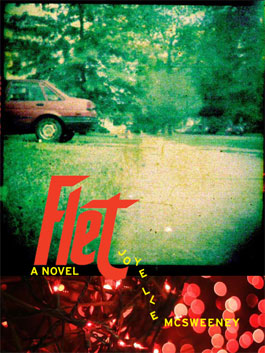 Flet goes down in a spaced-out, delimited future in which all cities have been evacuated after an oft-invoked “Emergency.” As the decentralized citizenry binge on the endless, aimless filetape transmissions draining into their homes, our eponymous heroine, a quiescent-but-full-of-agency Administration flunky, is poignantly alone in her suspicion that the Emergency is a tool of sociopolitical manipulation, if not oppression. A face-off between this tentative muckraker and her icy superior is inevitable at the mandatory, nationwide Reenactment, in advance of which Flet finds herself dreaming and driving endlessly off the map. Will she find the missing cities, or will she lose herself in the flood-tide of images that wash over the Nation?

An elegant entry in the field of speculative fiction, Flet finds poet Joyelle McSweeney slowing her distinctively hyperactive imagination up to the speed of narrative.

“McSweeney acutely imagines a locked-down world only millimeters distant from our own. Flet is an ice-blue, dystopic rubric that makes cool remarks on the government’s manipulations of mass media, then goes for a lyrical ride. Jeweled surprises await in this prose.”
—Stacey Levine, author of Frances Johnson

JOYELLE MCSWEENEY is author of The Red Bird (winner of the 2002 Fence Modern Poets Series Prize) and The Commandrine and Other Poems (2004), and of a companion novel to Flet: Nylund, the Sarcographer (2007). She is the founding editor of Action Books and Action, Yes, a press and web journal for international writing and hybrid forms. McSweeney is a member of the MFA faculty at the University of Notre Dame and lives in Indiana with her husband and daughter.