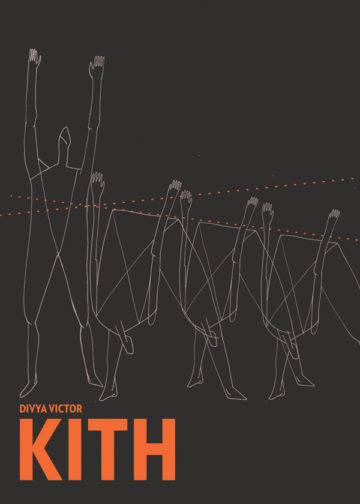 Kith describes post-colonialist relation from the painful psychohistorical perspective of a hybrid, in multiple exiles. Victor reaps the pain, reams the pain, approaches the painful material from striated vantages, using discrete methodologies of extraction. This is not a pretty poetry of nostalgia for bittersweet pungencies, no invitation to savor bemusing exoticisms; this poetry invites disassociation from that which is no longer to be borne.

“For Divya Victor, history is a wound. And the poet’s language is bright like the white bandage on which blood shows more clearly. What we have on display in this book is an imagination that is as wide as the world. Part-anthem, part-instruction manual, part-memoir, part-dictionary, this text offers testimony to other ways of being and remembering, a reflection on forgotten lives. I read most of Kith in airplanes and airports, and found myself paying greater attention to everyone around me. I was grateful for Victor’s long sentences that spilled into seemingly every corner of our contemporary reality—these sentences that describe so well our locked destinies and, at the same time, perhaps because of their wit, or vitality, or compassion, deliver us into liberated zones of heightened consciousness.” —amitava kumar

“Kith is a luminous work of ‘Multiple Telling with Multiple Offering,’ as Theresa Hak Kyung Cha might say, the dead flittering out of her thrifted coats with kith in their mouths. Kith, like neighbor, friend, enemy, or community, is a kind of conceptual limit, ‘not of blood and yet belonging’; not kin, which it is often confused with, but kindred, kinship, and also knowledge. Yet in Kith, it turns out that kith is also kin and kin is also kith and the neighbor is also friend, enemy, and the other neighbor’s neighbor, and ‘we’ are all stuck here at the limits of language grasping for new forms of community and belonging when those words suck too yet refuse to burn. Lodged within this ‘atlas of mangle’ known as now-time is something at the helm of being named—Kith’s offering, Kith’s knowledge, Kith’s open boat, Kith’s astounding ‘shriek frightful.’ Where were you when it will happen?” —rachel zolf

“A keen shriek for stricken kin, Kith pierced me. Divya Victor’s concentrated anger and t(h)rilling intelligence reverberate through these poems, essays, pronunciation exercises, and grim primers. This monumental work shifts shapes, not for virtuosity’s sake—though virtuosic it is—but as one takes up an array of instruments for an intricate undertaking. Quandary: How not to ‘become a jingle of anklets’ the colonizer desires? Perhaps by being a jangle of them. Kith is that dissonance composed; it sounds bitter, tender, and utterly necessary.”  —douglas kearney

in one such case a woman embroidering the name of her fourth child into the mantelpiece tapestry was called by her husband to suckle oil from the Persian gulf in a city that clotted around a oasis where centuries ago star crossed lovers failed each other— Layla and Majnun: she dying in waiting, he walking miles and kissing every wall to know if she lived behind it— and from which she would return without her hair and with a spool of thread to spell again