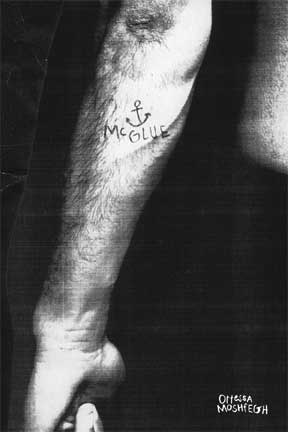 McGlue is in the hold, too drunk from the night before to be sure of name or situation or orientation—he may have killed a man. That man may have been his best friend. Intolerable memory accompanies sobriety. A sail on the seas of literary tradition, Moshfegh gives us a nasty heartless blackguard, a knife-sharp voyage through the fogs of recollection.

McGlue was selected by Rivka Galchen as the first recipient of the Fence Modern Prize in Prose.

“A sextant of the psyche, McGlue works its grand knowing through the mouthfeel of language; it’s a sharply intelligent, beautiful, and singular novel. A scion of Nathaniel Hawthorne and Raymond Carver at once, Moshfegh transforms a poison into an intoxicant.”      RIVKA GALCHEN

“Here is the story of one man’s pursuit of self-destruction and his friend who drowns in his wake, brilliantly and desperately conveyed. Written in a style at once intoxicating and intoxicated, McGlue is a fierce and sodden historical novel that pulls nary a punch.”      BRIAN EVENSON

“Moshfegh shapes McGlue with recollections of deck-side endeavors, childhood encounters, pitiful attempts at intimacy, and most importantly, with language both cutting and clean, describing a man who loves women most when his hands are at their throats—‘all that soft gristly stuff to squeeze.’ But McGlue is much more than simply murderous. He is a soul at sea and unwelcome on terra firma.”      PAMELA RYDER

“Short-fiction genius Ottessa Moshfegh’s first novel is a gorgeously sordid story of love and murder on the high seas and in reeky corners of mid-nineteenth-century New York and points North. McGlue is a wonderwork of virtuoso prose and truths that will make you squirm and concur.”     GARY LUTZ