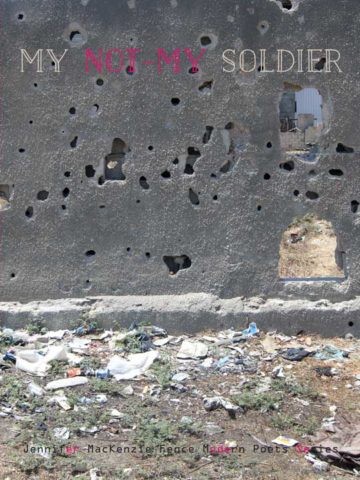 2014 Fence Modern Poets Series winner Jennifer Mackenzie’s debut is a travelogue of embodied intellect and flights of gorgeous observance. The identified speaker of Mackenzie’s charged, lyric utterances is a woman of style, wit, and charm. Often in love, often traveling in a foreign land, often in love in a foreign land, and always alert to sensory stimuli, receptive to signals and the demands made upon a living, moving, implicated creature to act, to think, to retreat and to relate.

“Is poetry ‘a way to stave off history’? Jennifer MacKenzie asks this in Damascus, deeply aware that ‘they are not gonna bomb you there in Oregon.’ Reading this marvelous book I kept thinking of Zukovsky’s ‘upper limit music/lower limit speech’—these poems are first rate speech and music at the same time.”  – Maged Zaher

“Mackenzie’s poetry navigates loss; the distance between relationships and whole countries, & pain that can’t be held inside (or by) the body. ‘Do not hold doors/Do not lean on door,’ she warns, even as the clear lines of her verse close decisively over seemingly familiar objects: white towels, courtyards, horses. This is a world made strange by grief & wonder in equal measure. To read this book is to ‘be[come] smaller than a comma/tenacious, some new unnamed virus.’” – Kiki Petrosino