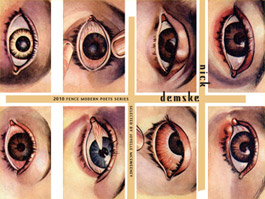 Nick Demske writes from culture like the Hollywood version of a rebellious slave, the role shredding off him, culture’s synthetic exemplary tales shredding and piling up on the floor of the projector room, but non-biodegradable, sticking around, the pancake makeup also strangely persisting, rendering his face plastic and one with the material of the film, the celluloid itself. How can we tell this dancer from his nasty dance? Language has ecstatic prison sex in these narrow cells, de-synchs and hooks up in detrimental sequences which will make the baby sick; the sonnet form both persists and shreds, goes on talking/being a talkie; his own name copies itself again and again like a one-man “I am Spartacus”—splits like a wascally wabbit before the Law. One lump or two? Or, the sonnet is one brief sequence played backwards and forwards until its fake, twitchy face says everything: “This poem is named after you, like a slave.” “Nick Demske, you are everything wrong with the world. Which is to say: the wor/Ld.” Is it shit or is it speech? Is Language the patented dance move of the sapiens sapiens or the catchy scat that shows where we’ve passed? The staff or the shit of life? “This humor so dark you mistake/It for chocolate.” “God wins because he’s bigger,/Until I digest this cracker, converting it on/Into the drabbest defecant His face will ever don.” Yum yum! A poet both coprophilic and narcissistic finds his own face reflected in some pretty dirty places. Or, as Catherine Clément has held, “To eat the placenta, one’s excrement, or one’s Dasein, to devour the loved one with kisses or to make love with God: these are some of the possible equivalences to the body’s debris. The angel is part of it, as is the beast that follows him like a shadow since Pascal united them, one behind the other in an ineluctable procession.” Or, per Demske, “I enjambed that promise/So far up the Muse’s tuchis he still shits shards of meter.” “Ick, narcotica prissy self-gratified non-prophet: AWE SHIT.”
—Joyelle McSweeney

Love poems to the “bad,” composed in the idiom of cliché, conceptualized as self-portraits, alive in the historically awesome—presently bankrupt—form of the sonnet, these debut poems obsess, as do all dead white men, over big, common social constructs like race, gender, and sexuality. Demske employs himself with yet is repulsed by categorization: Fake and Real. He desensitizes your obscenity-mometer.