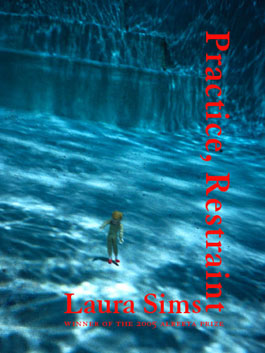 Winner of the 2005 Alberta Prize

Laura Sims’s work engages the lyric critically on its own ground. This is especially true in the fascinating “Bank” series, where the poet subtly tags the lyric’s chronic preoccupations with the tracking devices of financial institutions, so that we get, “the blue of withdrawal,” or “A peacock/ . . . /refuting/what rifles report from her far-flung states.” In these poems we move immediately beyond innocence. Sims gives us a sly, fast-paced, strangely resonant form of minimalism.
—Rae Armantrout

Brilliantly spare, Laura Sims’s poems take huge leaps—always oblique, and always uncannily precise. Arranged in separate books that illuminate their subtle themes, these poems don’t speak about things as much as they speak the things themselves: the complex situations of human society become distilled into vivid instants—sometimes alarming, often gorgeous, and always rendered in a language refreshed by her frank intelligence. This book is a jewel, compressed and sparkling.
—Cole Swensen

Upon the terrible isolation of words, the poet builds a progression of critical songs for a critical time. The restraint is active, and the spaces, the silences, are freighted. Laura Sims’s tooled precision proposes a choice between friendship and drowning or between harmony and delusion. The poems shine on the cracks in the perfected appointments of armchair authorities. Time, in its bounty of tired truths and consequences, reminds us, “It can never be long, long ago.” Practice, Restraint is a keen and coolly discerning debut collection.
—C. D. Wright