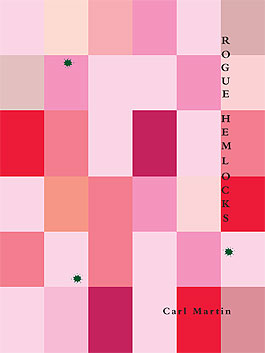 Poet Carl Martin’s literal and figurative “Brit vernacular” asks of its reader nothing less than a total ignorance of expectation. These poems, coming after a long silence—Martin’s first book appeared in 1991, and his second in 1998—engage Romantic tropes such as Vision, Beauty, and the Self cheek-by-jowl with a Pop madness and a Modern despair, all in a high cadence that is winkingly isolate, stunningly productive. Martin’s allusions and affinities are to and with Olympians of aesthetic conduct: Tolstoy, Maxfield Parrish, Jean Genet, Maeterlinck, Kate Moss, Peter Pan, the Green Man. “That’s a sprinkle of rice in the air, a small fountain/ ingrained in the brain. Some glee in a philosophy/ of interference between world and self. Objects/ Flee, bolting and coursing in the wide green field.” These lines are marbled through with the Real, and buffed by an apprehension so alert to Unreality as to be downright illuminating.

“Carl Martin’s poetry bears the same relation to contemporary writing that Conlon Nancarrow’s player piano studies do to traditional piano music. In other words, it’s unlike anything you’ve ever read and will take you to places you never knew existed.”
—John Ashbery

“Carl Martin . . . well, it is hard to avoid superlatives when speaking of his poems. He is possessed of poetic genius, a word I use with great caution. The things he can do with language, a medium which he clearly loves and thoroughly distrusts, are astonishing.”
—Gilbert Sorrentino

“Carl Martin’s poetry is highly unusual. I find his originality of diction to be most impressive and his revision of surrealist agendas to be most imaginatively compelling.”
—John Hollander

“…[T]his poetry can become persuasive; the voice though modulated rushes on and makes an absolute concession to its own power.”
—Barbara Guest

“…[I]n its dislocations of self and syntactical displacements, it addresses . . . issues perhaps first generated by the hallucinated and visionary work of [German Romantics]. In such work the very possibility of any unitary meaning is subverted. Martin certainly seems conscious of these threads of affiliation as he explores the boundary between inner and outer, between expression and representation.”
—Michael Palmer