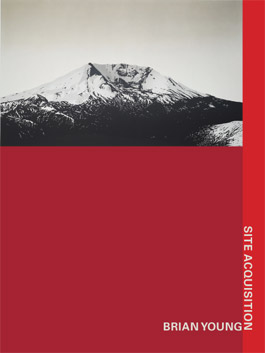 A certain slant lubricates the vision of Brian Young’s second book of poems. Lines of verse veer top-speed around corners, producing unexpectedly lucid interrogations: “The sun, / Then, in a brief // Case blown open, / Appears. But who is / Here to have it, / To bang for?…” Anger is allowed in these poems, and disillusionment, and a general mistrust of “landscape”—the natural world owned and used—all countered with the anodyne of an inebriate sensibility that loves the liquor in which it bathes, the language by which it collaborates. “I can co-locate here. / I won’t digress, not with these / Metal parts in the desert wind / Not with a bank of clouds / Stored on film.”

“There’s something calamitous in the very lines of these new poems like a surprising wind in trees. Intelligent and musical, this kind of struggle among elemental things is largely not familiar to American poetry. Brian Young is one of our very best poets.”
—Norman Dubie