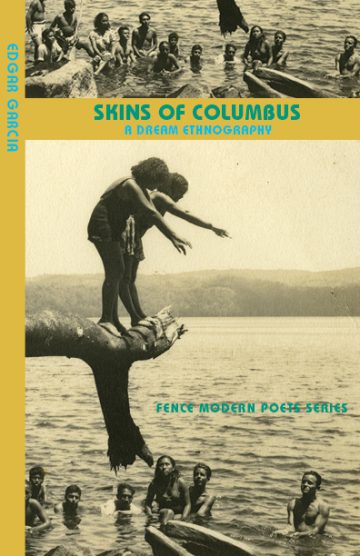 Colonial violence is a sticky phenomenon, gumming up the associational matrices of our daily lives and dreamscapes. Edgar Garcia intervenes with a poetic experiment: Every night of the three months of Columbus’s first voyage to the Americas, Garcia read his corresponding journal entry before sleep. Asleep, his mind sutures displacements, migrations, and restorations into an assemblage of hemispheric becoming.

Edgar Garcia is part of an exciting new cohort of Greater American poets (those who cast a revealing light on the hemisphere from Alaska to the tip of Patagonia) who are working towards decoding & re-coding multi-metrical conceptions of historical space-time with the intent of reinvigorating political agencies. Skins of Columbus is a virtuosic exfoliation of nested chronicles that give voice to the heterogeneous temporalities that make for “the people.” This is a maximalist poetics. Garcia spares no formalistic strategy to explore the chasm between said people and their “story.” If the Greater American, Greater African, Greater European, Greater Oceanic and Greater Asian poetics stay on track and avoid the pitfalls of overt (or covert) ethno-nationalism, while critically flushing out their respective mythical terrains, we might just arrive at a genuinely new understanding of The Globe’s Inherent Potential. And what could be more pressing right now than that? Rodrigo Toscano

Edgar Garcia comes through with a counter-chronicle of conquest. He shows us how skins are like masks the poet and storyteller puts on and takes off, most especially when engaged with epic histories and the myths therein, changing places, changing times, and of course, changing us. Michael Taussig

Good morn or evening, friends. You should feel good right now because Edgar Garcia plays the Skins of Columbus inside out, inducing the kind of “speech-like movements of leg and hip” that can get you swallowed and put away, which ought to make you not feel so good. This book is ravishing and ravaging, and/or wants to be, which is troubling, though that is as it should be. Can we dream ourselves inside out of what consumes and abandons us? This question, which bears the world’s disaster, is our nightmare, though we are starving, even abandon having been tainted. Projection, ingestion, rejection and introjection merge in the mirror of constantly midnight, brutally Christian profligacies of diary, conquest, denial and refreshment. Meanwhile, over and over, we sing “Don’t Explain.” We sing it to ourselves, about ourselves. They shit us and they shit on us and we shit ourselves. In this intestine battlefield and looking glass, Garcia sings all that, poetry and criticism haven gotten back together after many broken promises, in the breaking of many more, as the desire for subversion and embrace to get back together, too. Evidently, that reconciliation exceeds human possibility. Criticism affirms this negative condition, as Garcia sings, singing so he can see if—violently, gorgeously, way more than humanly—we can sing our way out of inside out. He’s bone deep, and miles ahead, and just getting started. Fred Moten