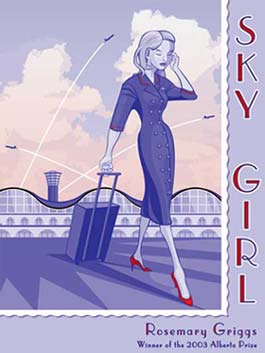 Winner of the 2003 Alberta Prize

“In her wonderful first collection of poems, many of which trace the post-9/11 experiences of a flight attendant named Kimberlie, Rosemary Griggs shows an astonishing ability to represent the subtleties of a mind in fear. In the poem ‘DEN-EWR,’ Kimberlie explains to a pilot that her fear of flying is comparable to that of wildebeests on the Discovery Channel who must cross a crocodile infested river ‘knowing a few of them will be eaten but the majority of them will make it.’ In another poem, she takes an unexpected comfort from the squareness of a patch of grass on which she has chosen to lie down. In its existential accuracy and glamour, Sky Girl reminds me of Knut Hamsun’s novel Hunger, or the perilous emotional landscapes of Peter Handke’s stories. Griggs’s fictive detail, accuracy of idiom, and offbeat cadences lend themselves to the long line: ‘It’s that you keep saying you’re tired makes me want to weep’ or ‘I said please tell me I won’t be mad at you but I need to know as a girl to a girl please help me out here.’ This is that rare book in which the sentences are as beautifully observed as life.”
—Paul Hoover

“Sky Girl is an answer, within an echo, to an earlier generation’s Coffee Tea or Me legacy. A fierce and savvy writer, Griggs is by turns whimsical and elegiac, and always very much of this moment.”
—Brighde Mullins

“As tender as a fresh contrail overhead, as spare as a quiet moment along a river. Wry, sexy, introspective, sad, and all the while alert to her absurd perch on the first civilian line of defense against terror, here is a voice that brings sharply forward one uniform we may have taken for granted. ‘Coffee, tea,’ or, better, let the attendant as poet usher us into the attentive world of Sky Girl. With a fine use of found materials, striking images, deft turns on old stories, and sad songs, Rosemary Griggs, who is ‘not sure you can have a secret and / also have love’ has learned that ‘when you’re poor you have to be magical,’ as many of these absolutely unpretentious and hard won poems prove to be.”
—David Hamilton