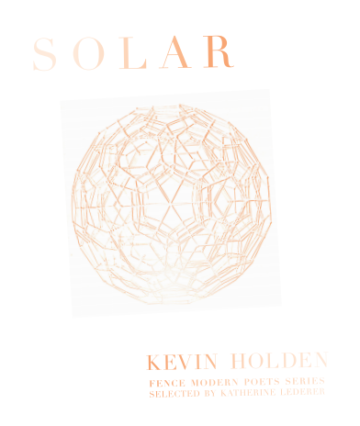 “Ranging widely while remaining in a brilliant measured orbit, Solar is pure syntax and as such outside of time. Individual poems both illuminate and radiate. Phrases build and curl and flare. The sun is here like capital and also like romantic love. These poems will suffuse you.”

“Holden opens a portal and keeps it open, something only the best poets can sustain. The capacity for new experiences with familiar elements is what he always shows us in his poems and how we have yet to fully comprehend what we think we know. He writes, ‘the symptoms are visible they are everywhere’ then he fills our chests with it.”

“Both elemental and astronomical, Solar is a search for a mechanism to bring us closer to the closer—ultimately finding language to be that mechanism, bringing us to the light of the light and the sun of the sun, which requires a renovation of the idiom. Holden begins reworking it at the level of its “silkstreamingnucleotides” in a vivid, charged vocabulary that overflows the alphabet, dynamically demonstrating that “all geometry flows into music.” There’s a sharp, new music alive in this book, with harmonies as stunning as they are startling and melodies that not only stay in your mind, but also recalibrate it.”