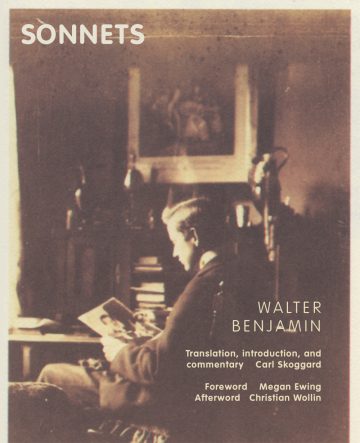 With Foreword by Megan Ewing & Afterword by Christian Wollin

As the Third Reich advanced on Paris, Walter Benjamin entrusted his writings to the philosopher Georges Bataille. These eighty religious, lyric sonnets, produced in Benjamin’s twenties in a sustained response to the suicide of his college friend in protest of the First World War, were among those writings. This first English translation, a bilingual edition, features extensive context and commentary.

“Skoggard’s introductory essay is thus an important contribution to Benjamin’s life story. The poems themselves, however, present difficulties that would stymie any translator. Skoggard perhaps puts the best face on it by observing that, “unlike the sonnets written by anyone else,” and “equally remote from dramatic utterance and from sustained lyricism, they strike us as the expression of some hermetic thought process.” The poems’ mashing together of tormented syntax and overwrought emotionalism with strict formality in the handling of the sonnet form (which, wisely, Skoggard has not tried to emulate) has led to results that are often rebarbative, sometimes ridiculous: “But for my lips slow to confess a master / Waited who should better mark them / The hand which hesitates itself to give / / To friend is by him seized a crueler guide / So that the heart which loved in secret / Must now be spilled for all to see in rhymes.” And yet it may be that an understanding of Benjamin cannot avoid passing through these poems. Gershom Scholem, after hearing Benjamin read part of this oeuvre, reflected that Benjamin “can only have a connection with persons to whom he can speak of it” — which was almost no one.” —Barry Schwabsky