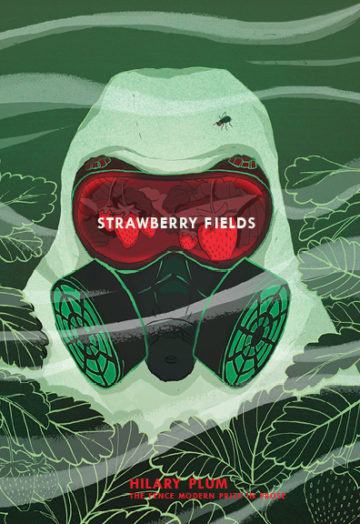 15.99
Winner of the Fence Modern Prize in Prose.
Much of what is read as news is fake; still the real news is, at its very best, partial. At the heart of Strawberry Fields is the storied figure of the journalist, who despairs of accountability yet must accept its disorienting weight. This is a global fiction; these shapeshifting journalists together demonstrate the ethics of reading and writing “news from elsewhere.” An antidote to the normalization wielded upon us by narrative, Hilary Plum crafts with dizzying invention a recursive disorientation of stories starting over and over again, without conclusion. The fragmentation of these harrowing truths, ripped from the headlines, is a reprieve; at least it’s not really “happening,” like normal fictions do, simulacra at the speed of life, not really “happening,” at least not at the rate of narrativity. Oh, but it is. This fiction jumps through genres, destabilizing players and circumstances: revolutionary Ireland, Iraq in the midst of US invasion, and Pakistan during years of drone warfare, an eating disorder clinic, a farming community in the midst of pesticide poisoning, the plight of a journalist imprisoned in Mexico. Our throughline is the recurring story of a reporter, Alice, and a detective, Modigliani: together they failed to solve a crime that occurred years ago amid the chaos of a hurricane, and we find them now piecing together the stories of five murdered veterans of the war in Iraq. Making up nothing, or everything, all around the globe these horrors go on daily.
“The writing in this novel is haunting. Plum uses the beauty of her prose to record indelibly the unbearable destruction of beauty we Americans are perpetrating through the history we are living. She has created a style that values what is being lost with the accuracy of inconsolability.” —Peter Dimock
“Few American books have as truly global a perspective as Hilary Plum’s second novel, which ranges over remarkably disparate territories with exemplary economy of means, and holds together not only aesthetically but also as a vision for our times. As multi-vocal as it is constrained, Strawberry Fields balances the sensual with the cerebral, the human body in the world with the human imagination perceiving it therein. And in so doing it achieves the seemingly impossible virtue of being a political book without a hint of polemic.” —Youssef Rakha
“In Strawberry Fields, Hilary Plum’s crew of journalists move like restless flies from one battlefield to another, demonstrating the struggle against (and implication with) the logic of late empire: how a contested truth splits into fragments, and cannot be made whole. But Plum knows how to assemble the shards so that we recognize in them the image of our own burning world, where the murder of five American veterans takes its rightful place in an international constellation of violence, recrimination, and environmental degradation. As Plum’s investigators burrow into text and memory, her scrupulous prose—full of mingled lyricism and irony—places her in the tradition of Danilo Kiš and Roberto Bolaño: writers who, despite the constant risk of despair, commit themselves to beating against the current of an ever-widening river of blood, fighting upstream to find the source.” —Sam Allingham