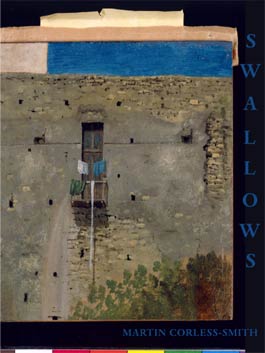 Swallows uses the metaphor of the House to explore the uncanny presence and absence of self, and world, in poetry. With embodiments ranging from the eighteenth-century inquiry into the whereabouts of the Sabine Villa—a search determined to locate a physical site behind Horace’s celebrated verse—to lines transcribed from the walls of a house, these poems acknowledge the desire for the presence of the physical in the written, while they reify the beguiling distance between writing and the world. Throughout the book, swallows act as a kind of genius loci: presences that arrive and depart continually.

Swallows is a continuation of Nota‘s neo-Romantic desire to react through words to some original world—to see that world as poetical and meaningful even as we acknowledge that the body of the poet vanishes in the instant of the poem, that the world is not manifest in the poem, and that it is impossible to know just what of the world or the self is ever iterable.

“We are swallowed up irreparably, irrevocably, irremediably . . . envy the sparrows and the swallows, yea.”
—John Donne