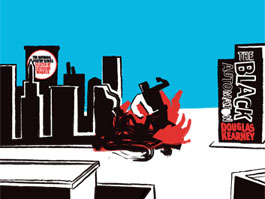 Winner of the National Poetry Series

From ambivalent animals thriving after Katrina to party chants echoing in a burning city, The Black Automaton troubles rubble, cobbling a kind of life. In this collection bodies at risk seek renewal through violence and fertility, history and myth, flesh and radios.

“First, you have to see Douglas Kearney’s visual poems, which cheekily diagram cultural memes as if they were parts of speech (as they are). The Black Automaton has its share of sharp, tender lyrics, too…these exploit the political possibilities of puns and the way meanings hinge on inexact resemblance. Kearney’s poems tweak and skewer pop culture and literary sources from Paul Laurence Dunbar to T. S. Eliot to traditional ballads and blues…Kearney’s work turns poetic and cultural conventions disquietingly inside out.”
—Catherine Wagner

Douglas Kearney’s work as a poet, performer and librettist has been featured in many venues in print, in-the-flesh and in digital code. His first book, Fear, Some, was published in 2006 (Red Hen Press). In 2008, he was honored with a Whiting Writers Award. He lives in the Valley with his wife and teaches at California Institute of the Arts. For more info, visit www.douglaskearney.com.

“Douglas Kearney’s innovative new collection makes me tremble like a “mouth and mind full of fish hooks.” It makes me think of the despair at the heart of ecstasy; of restlessness as a kind of anodyne. These poems literally vibrate with Kearney’s precocious intellect and passion. They hum, they bang, they bite. This is a jaw-dropping, electrifying book. What else can I say? I have never encountered poetry like this before.”
—Terrance Hayes, author of Lighthead and Wind in a Box

“We inhabit a world of automata, complicities, complacencies, sound waves, soundless suggestive sales pitches and blaring lingo-infested jingles, machines, robots, rotgut and gut-wrenching city-burnt silences, slave ships, space ships, straitjackets, samples, metonyms and nimble meta-limbs angling gangly nomenclatures, singularities, consecrations and condemnations, assassinations and ass-backward nations, disgraced antonymic masses of matter jostling in unchosen seas, types in stereo singing syncopated tunes out of time with the lock-step of what we might have been supposed to think. What good is poetry in such a world? No good. Not good, useful: “righteous art is a rod./rods are very useful.” The Black Automaton is a whip-smart lightning rod: use it.”
—Jen Hofer, author of one and translator of sexoPUROsexoVELOZ+Septiembre (Dolores Dorantes)

“Kearney’s poetry flows from a consideration of urban speech, negro spontaneity and book learning not easily parsed if you haven’t fully digested every major hiphop lyric composed between 1979 and 1983 and spent a considerable amount of time backtracking the library stacks stuffed with Zora Neale Hurston and Ishmael Reed’s neofolkloric trails. The Black Automaton is the graphic afterbirth of a Jeep with a booming system driven at 90 mph into a stack of Bibles, small press journals and the Tibetan Book of the Dead by a man who mistook his mouth for a sledgehammer.”
—Greg Tate is a writer/musician currently working on a book about James Brown and is still HNIC of Burnt Sugar, The Arkestra Chamber