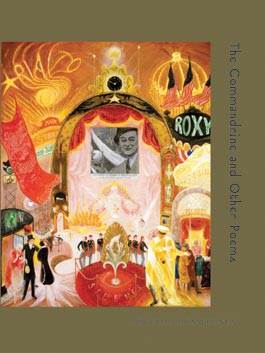 Joyelle McSweeney’s The Commandrine and Other Poems is a necessary series of interrogations. This verse play and poems question what it means to endure knowledge in a global economy. With Yeatsian breadth, McSweeney insists not on anarchy but on an Odyssean journey, beyond the sirens, home. This inventive lassoing-in of reality as we are presently experiencing it leaves no one “clean” or in the clear.
—Claudia Rankine

The brilliance of Joyelle McSweeney’s poems is a given; what remains delightfully open to negotiation are its methodologies and its mien. Is she an earnest relator, using wit and gesture to tell the story faster? Or does she take the piss of her subjects, using perfected skills of mimicry and divination to exploit, spot on, their errant humanities? In her second book McSweeney finds her subjects in the long form; “The Commandrine” is a verse-play that in nine scenes tells the story of sailors Zest, Coast, Ivory, and Irish, and their watery run-in with the Devil. “The Cockatoos Morose” stirs Eliotic grandeur with Stevensian absurdity for a cocktail of delirious observation and rigorous leaps of the sort for which McSweeney is certain to become known. “Crusade-dream flips like a standard. The standard / narrows to a point. And points. / Then it dips like a fern.”