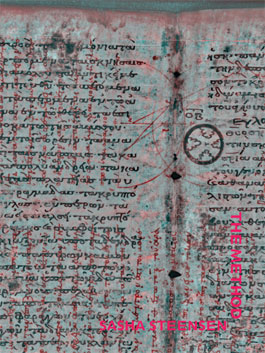 The Method is a manuscript of theorems and proofs written and diagrammed by the mathematician Archimedes in Syracuse around 250 bc. The Method is a book of poems by Sasha Steensen. The former is a text that has survived, at least in parts, through a series of processes that includes palimpsesting, thievery, obscurantism, acquisition, and conservation. The latter text takes the former and its history, which has been invisible, overwritten, and requisitioned for use value, as a jumping-off place for her own meditation on the relationships that develop between a person and her historical truth, a person and her writings. Steensen’s The Method treads carefully in the terrain of fact that foregrounds her investigations, and emerges centuries and centuries on in the only moment that remains to us. “I thought:// The Method, so happily recovered./ I am the one who called us all together./ I driven time./ I wars and waves./ I was./ I go over sea-lanes rife with fish./ I did not.// I saw a shadow on the water./ I know this situation makes a perfect poem,/ but I will not.”

“What or who is The Method? Charming, dangerous, love-struck, mistaken—an angle of the human mind. Trapped together in nets of language, geometries of battle, the human words prove themselves cyclical, as centuries feed one another like nutritive springs mid-sea. Somewhere in there, men and women found ways to measure the world’s parts, and these poems show us the forms, as we sit down at the table (set down in this book) with The Method to partake of the ‘bottomless years.’”
—Eleni Sikelianos

“If whatever it is that makes humanity so messed up were separable from us and wound itself assiduously through every part of our history, if that otherness could announce itself as orphaned baby or monster or missing manuscript, if our behaviors made it as uncomfortable and unhappy as it made us, there would be Method to our madness, and Sasha Steensen would have mapped it in her latest, which in its wit and dark didactic elegance is going to keep me up at night.”
—Catherine Wagner

“It is easier to supply the proof when we have previously acquired, by the method, some knowledge of the questions.”
—Archimedes