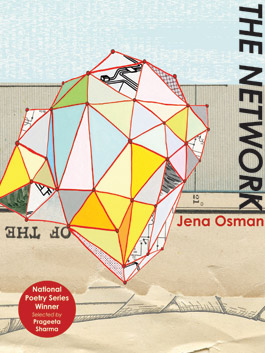 Winner of the National Poetry Series

“Jena Osman subjects American history to a rhizomatic genealogy. What she finds, through a series of etymological excavations, are the foundational, intersecting forces of slavery, finance, and empire at the heart of new world settlement. The Network is a brilliant historical poem in the tradition of The Cantos, The Maximus Poems and Dictee, speculative works that rather than invent a world, rub history the wrong way in order to understand this one.”
—Michael Davidson

“Like an archeologist of the American idiom, Jena Osman’s The Network brilliantly excavates the material remains and missing histories of our collective semantic strata. From the annual Philadelphia Mummers Parade and the Wall Street Financial District to the tragic 1845 Arctic expedition of Sir John Franklin, Osman’s poetic assemblages teach us “how to map a changing thing” with grace, acumen, and a relentless documentary drive.”
—Mark Nowak

“Jena Osman ruminates on a landscape besieged by commerce, like a time-traveling flâneur, wandering along the streets and timelines of colonial Manhattan, navigating the crowded sentences that make the story, and slipping down into the gene pool of the English language, home to the poetics of her current engagement. The work here is multivalent, moving tautly across genres, in a form reflective of the many faces and flim-flams of history and etymology: in patriotism and rebellion, in infrastructures of sugar, paper and flesh. The Network gets into some civilized myths of The City, while immersing us in resonant, alternate views for the past and the present. I really dig it.”
—Tisa Bryant

Jena Osman follows poet Cecilia Vicuña’s procedural instruction to “enter words in order to see.” The Network emerges at the intersection of conceptual and documentary poetics, as Osman applies an idiosyncratic methodology to etymological study, to establish “derivations and kinships” of phenomena and persons and peregrinations.