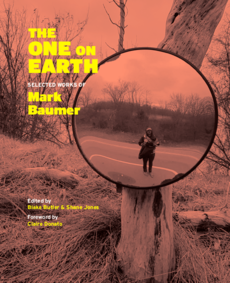 Writer, poet, and activist Mark Baumer was the author of MEOW (Burnside Review Press, 2019). In 2017, he was struck and killed by an SUV in rural Florida while walking barefoot cross-country to raise awareness of climate change. He once wrote 50 books in a single year. Mark Baumer was an award-winning poet, committed activist, devoted family member, and compassionate friend to many. He was in the midst of a cross-country journey―the second he’d undertaken in his young life―when he was killed. This crossing had a larger purpose―Mark’s cause this time was raising awareness about climate change, while simultaneously raising funds in support of FANG, a nonprofit organization and activist group in Providence, Rhode Island that he was a member of. Oh, and he’d be doing the walk barefoot. On January 21, 2017, Mark had just chronicled his 100th day on the road that morning as was his daily habit, utilizing various media platforms―something he’d been doing since leaving his house in Providence on October 14. At approximately 1:15 p.m., Mark was struck and killed by an SUV driven by Sonja Moore Ziglar, along U.S. 90 in Fort Walton County, in Florida’s Panhandle. He was walking legally in the middle of the paved shoulder, against traffic, wearing a fluorescent vest, on a long, flat straightaway. Mark was killed on impact when Ziglar’s vehicle left her lane and plowed into him at highway speed. He had turned 33 a month earlier, the week before Christmas. The Mark Baumer Sustainability Fund continues his work.

“Mark’s shorter prose pieces often read like fables containing moral lessons geared toward CEOs, grown men with anger problems, megalomaniacs, and white supremacists. Critics sometimes describe Mark’s writing as childlike, which feels apt and aligned with our world’s political landscape: children are, after all, leading the global climate movement; and the bulk of our nation’s leaders fail to lead at all because their souls are possessed by unprocessed inner children. Mark was an only child whose writing is full of rage and sadness, but not grief, per se. Rather, his work is often euphoric, seriously playful, ecstatically joyful, egoless: a manic response to the pain of being alive in a world where everything is dying in front of our eyes."
—Claire Donato, from her foreword to The One on Earth

“He was more than a poet or performance artist — Baumer’s life itself was a work of art. He was truly radical, and the most openhearted, unjaded human I’ve ever met.”
—Ottessa Moshfegh in Vulture