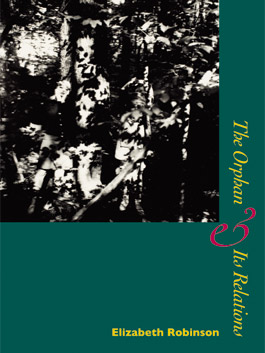 This collection of poems by Elizabeth Robinson circles around and around the place of the individual in relation to an other or Other or others. If human experience is nested in relation, “the braid of bodies that engendered this self,” it is also disrupted by “an intimacy that can disassemble and recreate itself” until an uneasy form of empathy emerges from the radical isolation of human introspection.

Using prose poems to suggest the narrative logic of the story, The Orphan & Its Relations takes references from domestic life, myth and folktales, and artworks “to bridge,” as Robert Creeley said elsewhere of Robinson’s work, “between the physically given world and that other we gloss with words, yet apprehend insistently as the defining presence of our lives themselves.”

“The Orphan is made who she is by loss. The source of her, who gave her birth, has died, and she (like he, like everything that ever lived or breathed or tried to speak) lives to try to find, bring back, replace or re-invent, then simply say the name of the beloved parent dead. This book knows this is the state of us, and that we can, sometimes, make beauty, even meaning, out of grief.”
—Rebecca Brown

“The Orphan & Its Relations declares paradox from the title on, and the fractal successions continue, albeit shaggily, like nature. Child jumps off swing; the mouth becomes a magician’s HQ. ‘Look, look.’ Mom doesn’t exist ‘and’ sits like a gumwad in child’s cheek; gap in child’s throat ‘distends for good.’

“This book contains the awkwardness of the real. Robinson keeps on building nests, weaving religious sticks and wisps that could just as well be biological. With great delicacy, she limns the beyond-binary stress of any little scene. Landscapes never settle down. There’s more weight in antinomy than in just-plain fact. ‘How does one escape? / By self-division.’

“It’s intense as a flock of birds, evolves into odd, painful scenelets like series of freeze-frames: metaphysics to physics to mechanics to mean or puzzling chunks. ‘Red is not the color of indecision, it is the color of the deaf.’ To quote out of context, ‘Quite a ride.’”
—Jack Collom

“The writing here is striking and startling: ‘I have tattooed to myself the synonyms for alone.’ But as a reader, I’ve never felt so un-alone, how could one, when the book is rife with the mingling of all human relation. Robinson has shifted an abstract lyric impulse into a direct, intimate utterance, where if every day contains its share of terror, there is also the presence of the divine. And if, as always, ‘there’s a story to be told, to unearth the ‘true’ thing,’ Robinson puts in story’s place the haunting traces of an off-kilter narrative lifted away then re-opened, nesting within, dividing and displacing all notions of self and character, life and story, so you don’t know who you are, or where you came from, orphan, but feel very much in the presence of origin.”
—Gillian Conoley