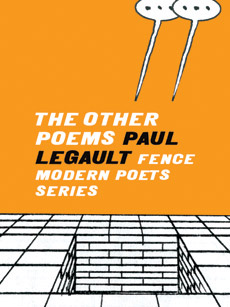 The spring in Maine is like a wet flame.
LUPE: That’s what they all said.”

Or did they? Each of Paul Legault’s seventy-five taut and dazzling sonnets begins with a cryptic couplet, follows with a four-line dialogue, whose voices (animal, vegetable, mineral, or disembodied like the date) engage in debate, as ardent as it is inconsequential, and then puts four more couplets to work, analyzing what we have just heard or spinning variations on its tense, absurdist drama. At once slangy and sublime, formally rigorous and yet full of surprises, The Other Poems breaks genuinely new ground for the lyric.— MARJORIE PERLOFF

Samuel Beckett would love Paul Legault. Both boys know that when absurdity holds hands with characters on stage (or on the page), pathos ensues. These poems are brilliant gems of invention and lightly-finessed emotion. And very funny. I love them. Truly I do. — MARY JO BANG

With The Other Poems, Paul Legault has produced a brilliant sonnet sequence that calls to mind the dizzying cinema of Busby Berkeley as much as it does the inexhaustibly inventive rhetorical contraptions of Shakespeare or Sidney. Rustling together a cast of hundreds as disparate as Sartre, Dolly Parton, The Little Chair under Water, Québec, Caliban, and Women with Unconventionally Long Hair, Legault has staged a spectacular form of existential sketch comedy that, for all its slapstick bleakness, proves surprisingly intent on “exploring joy and its intricacies.” Even as its characters drop such deflated zingers as “The duality of progress will deter us, / but from what exactly?” or else announce, with art-house taedium vitae, “I am going to watch a movie for a class. / Then I will eventually grow old and die,” the ultimate objective of The Other Poems is the pursuit of its own happiness—one cobbled together with extraordinary resourcefulness, spirit, ingenuity, and focus—and to show, by example, how we might each of us bask in the Klieg lights of our own devising.— TIMOTHY DONNELLY