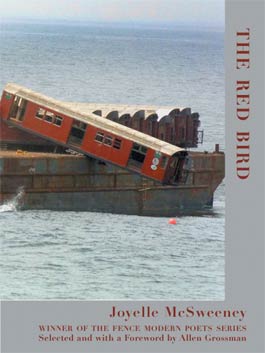 “The Red Bird has more in common with a fast red car, except that it does, indeed, fly. Within its agile slips and twists, McSweeney has managed a rare insight, casting our own historical moment as the postmodern medieval, full of knights running errands, where Machu Piccu, Radio Sucre, and lawn chairs all take on Biblical proportions. Except that it’s really Darwin we’re talking about, as he careens around the globe. She deflates this and other old battles by giving us new terms: ‘O beautiful he produceth / language from everyplace / on his body. . .’ This is a stunning first book. It glows in the dark.”
—Cole Swensen

“[McSweeney’s] poems are neither reductive nor fantastic. But they are profoundly mysterious in the way any truthful account of the world must be. Joyelle McSweeney is a poet with a vocation- a calling to the world. What is given her (the vocation) is to make others see what is given her to see.”
—Allen Grossman

In describing, in turn, a “Toy House,” “Toy Bed” “Toy Enterprise,” “Toy Election,” “Toy Maternity,” and nine separate accounts of “The Voyage of the Beagle,” one might think Joyelle McSweeney lacks high seriousness in The Red Bird, selected by Alan Grossman for Fence Books. While certainly playful and relentlessly up to date (check the “Celebrity Cribs” poem), McSweeney’s is a satirist’s sensibility, wickedly sending up, in “Avian light,” the identities and settings her speaker encounters, whether in books, “a maritime chart of the Yensai Delta” or “Afterlives”: “Forsythia opens its bright palm and the woman pushes her stroller out of it.”
—from Publishers Weekly