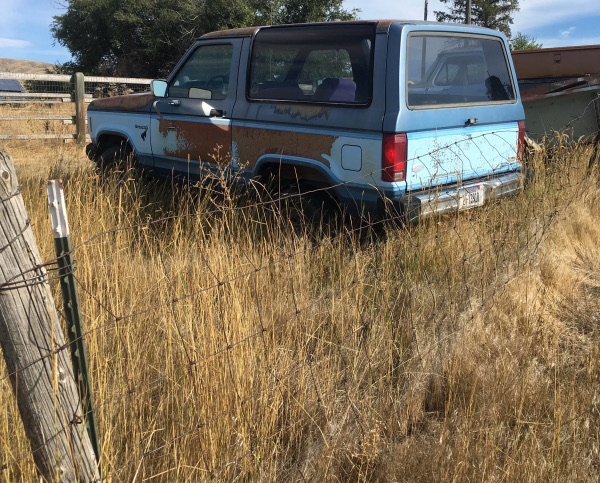 Starla and Ashley were in the back seat of the Bronco II talking to each other.  Starla who is Blackfeet was talking to my niece and daughter Ashley Rose who is Salish and Irish and also Chicana.  Starla said “Oooks!  Did you see that caddy purple jacket Sheila had on?  She was standing by the door with Chaw Felix and them.”  Ashley Rose who lowkey disliked Sheila said “Fuck her caddy.”

Starla and Ash’s conversations often went like this.  Reservation slang popping up in their high school talk.  Things you would never hear in the rest of the United States.  Words only held in the mouths of Indigenous people in Montana, sometimes only in the mouths of people who lived in very specific tribal places in Montana, places like Heart Butte or like the Schley Homesites where Ashley's family trailer was located.

Caddy and then caddy.  The word doubling.  Ashley Rose was riding the reversal of the Blackfeet adjective as it turned it into a noun—a feature of the word.  Its vernacular ability to switch codes.  Caddy was Blackfeet word play.  It meant good, excellent, dope, sick, nice.  Caddy in the sense that Ashley was using it also meant pride, “acting all good,” getting above yourself, and a sense of unearned self-importance that was a kind of Blackfeet social sin, at least insofar as I could understand the grammar.

My conversations with Ashley on the drive to Hellgate High School often went something like this:

Ash: “Do you think that you could drop me off a few blocks away from school?

Me, having had this conversation a thousand times and knowing the reason for the question: “Of course I could, honey.”

Ash, annoyed that I won't write rise to the bait: “Because you know people will just be so confused about why this dark girl is with this white lady, and also it's just embarrassing.”

Her white brother Mike hearing this near daily request moves around uncomfortably in the vehicle, but says nothing.  He's anxious that his dad, the last of three, is, as he once wailed, “nothing but a white man.”  This was not a statement of anti-whiteness, but an expression of his sense of a lack of belonging to the group.  A lack of belonging to his own family.  Riding also in the car, Max, her cousin-brother, who is white and my son, remains in the envelope of his own privilege and actually hears nothing, although his heart is good and he loves his cousin.  My part in the car conversations involves suppression of hurt feelings and white woundedness, maybe even white rage.  I wanted to say, “But your mother is white.”

I never spoke the words, but they were always there hanging around in the space between the bodies in the car, in the silence.  Ashley's other two brothers who are also Salish, Irish and Chicano take the opportunity for teasing.

Andrew: “Ashley Rose wants to be “Indin,” but she just looks like a white girl.”

Jesse: “Oh, quit crying around, Ash.  Cut you with a knife and all your Indian blood would be on the floor, anyhow.”

Ours is a race confused and cobbled together family into which blood quantum and other American racial myths enter and distort, but right now it is also a family riding six in a car meant for five, and there are some who are not wearing seatbelts.  Also of importance, whomsoever is in the front passenger seat, as well as the two riders jammed into the seat directly behind them, will have to deal with the inevitable fact that the wooden Saint Andrew’s cross holding up the broken front seat will give way.

It does give way at regular intervals having the effect of launching the seat backwards at speed into the knees and bodies that are behind it.  At this point in the drive the entire car erupts, without fail, into shouts, dramatic sighs, and complaints about the utter worthlessness and shame of the Bronco II.

In case there are questions, yes, the front seat of the Bronco II was indeed at that time held up by two pieces of wood nailed together.  It was the best that could be done.

Ashley particularly hated the car, just like her mother who harbored a special disdain for broken down and aging beaters and cruisers.  My sister once walked ten miles in Missoula in July rather than be seen driving in an old banged up and limping Volvo of mine—a car that someone had been generous enough to give me when I needed it.

Since at the time of this refusal to ride my sister was deep into her meth addiction, and her parental rights had been terminated by the state, you would have thought that the make and model of any car she might drive in wouldn't have mattered.  But cars have always been the perfect American cover story in my family and the perfect cover story in yours too.  Automobile absolution.

My sister felt a kind of American shame that can be blunted or subdued by the ownership of a good car.  Her meth addiction, her having had her first child at the age of 14, her failure to finish high school in a family that finished high school could all be erased if the car were caddy enough.  Cars mattered absolutely to her, and once she was clean, and an earner in the system, she was careful enough to save money to buy all of her boys a car when they graduated from Hellgate High.

Those cars she bought caused some pretty major chaos: appearing on the nightly news as “sought-in connection” with arson at Blue Ribbon Auto, cars that were the vehicles of physical abuse of girlfriends, an intergenerational event that mirrored my sister’s long record with the Flathead tribal cops, the many pages of her file documenting her sustained abuse of her oldest son.  Chaos cars that were the location of drug selling and consumption and sex and vandalism.  The scene of the crime for my family and the scene of the crime for you too.

The irony was that my sister did have a Cadillac for two short weeks once in her life.  My mother's mother died and left behind an older, tan, low mileage Cadillac two-door with opera windows, or maybe it was just a car that looked like a Cadillac.  I can't remember.  At any rate, it was the major estate asset.  The rest was all housedresses, tiny and useless triangular tables, and towel racks.  We, seven siblings, sat in a circle in my grandmother's near empty living room, and we decided that Abby should have the Caddy.

This burning was not an act of divine justice, or who knows maybe it was, but if it was it was also an act of social adjustment in her community.  “Fuck your caddy Abby Kane, you got too far above yourself.  You can't escape the trap of poverty and addiction in America that easily.”

From my perspective as the mother of Indigenous children not my own and as a white outsider, the term “caddy” is classic Blackfeet Vernacular English, which is more complex and larger in its linguistic nuances than Standard English.  Blackfeet Vernacular English is diaglossic—it speaks two dialects of the same language and makes English fret in its shadow rather than the other way around.  People should study its grammar and its word hoard in order to understand a great many things that they don’t think of, like sovereignty and refusal.  “Caddy” is a piece of Indigenous signifying, a practice in the culture of playing and undoing the language and values of settler colonialism and its lexicon is more explicit about the history of settlement: to wit, Antoine de la Mothe Cadillac from whence Henry Ford took the name of the car line Cadillac.  Cadillac is a name made up by Antoine Laumet, the colonial profiteer who stole Indian fur and land, and trafficked in profit and alcohol and trauma, and who is given credit in official history for the founding of Detroit.  Say Cadillac, then, and cities and wealth and freeways and art spring up in the speaking, each of them a screen for the violence and the plunder of the United States.  Say “caddy” in Montana and the word replies to that settler history—providing a gloss that is completely Blackfeet.

It wasn’t a Cadillac that Abby drove in the Lake County Fair Powderpuff Derby at Ronan that one year when she won the heat, took home 700 dollars, and broke both her wrists.  She drove in the Derby right before she went to treatment.  She was thin, translucent then.  I can still see her somewhere in my memory lying across my bed in a black dress talking in a slow way about her dreams.  Her beauty made me silent.  It was only later when the cancer devoured her lungs, ate up her uterus, burrowed into her brain that the inscriptions meth made on her body were visible at last.  In those days she had a supernal glow that made her unearthly, in some way—like an attenuated angel.  But she was still Abby, a thirty year-old woman who had cold cocked her 6’4 boyfriend with a 2x4, who had shattered the car windshields of her rivals, and who was known to have lunging, quick fists and children who feared her temper.

The derby car was not a Cadillac, but a Chrysler Imperial from the 1960s, which is a full-size sedan and a cousin to a Caddy.  Imperials seemed built for demolition derbies, they took the banging so well.  You had to hit another drive every minute and a half with your car or remove your flag and be eliminated off the track.  Powell County firefighters surrounded the perimeter of the arena wearing their gear.  They had a fire truck standing by, just in case.  “Aim for the tires, take out the drive line.  Then they can’t drive,” Abby said.  “I like to just crash it up, and get that frustration out.”

Abby was a member of the Beauvais Derby Team along with Rose Agnes and her nieces, LaDonna, Belva, and Tiny Girl.  They got that Imperial from Rose Agnes’ uncle, Sugar Monroe, who was from up north by Browning.  The car was all chopped up, stripped down and utterly wrecked.  Even though it drove, it looked like it had been sitting in a field for fifty years.  Tiny Girl glued some Stick Game scoring sticks in circular designs on the doors and hood to make it look fancy.  “Ho, that Imperial looks real caddy,” said Uncle Sugar, and then he laughed at his own automobile joke.

I can't signify like that on the English Language or on American history.  I work with Standard Dialect.  I can't make words run against themselves, be counter expectational.  I try to listen to the acoustics of Indigenous slang as it takes English lightly while doing double the lexical work.  I'm out in the grass of my sister's backyard in Arlee with her children, sitting next to the ashes of her car and her life, listening and waiting for America to drive up.

Katie Kane is currently reading or re-reading Prageeta Sharma’s Grief Sequences, any essay, piece of fiction, or interview by Sterling HolyWhiteMountain, Lauren Fornier’s Autotheory as Feminist Practice in Art, Writing, and Criticism, Jim Welch’s Winter in the Blood, Milk by Anna Burns, The Great Derangement by Amitav Gosh, Hope Against Hope by Nadezhda Mandelstam and the poetry of Osip Mandelstam, Red Skins, White Masks by Glen Sean Colthard, and a great many other books too numerous to mention right now.