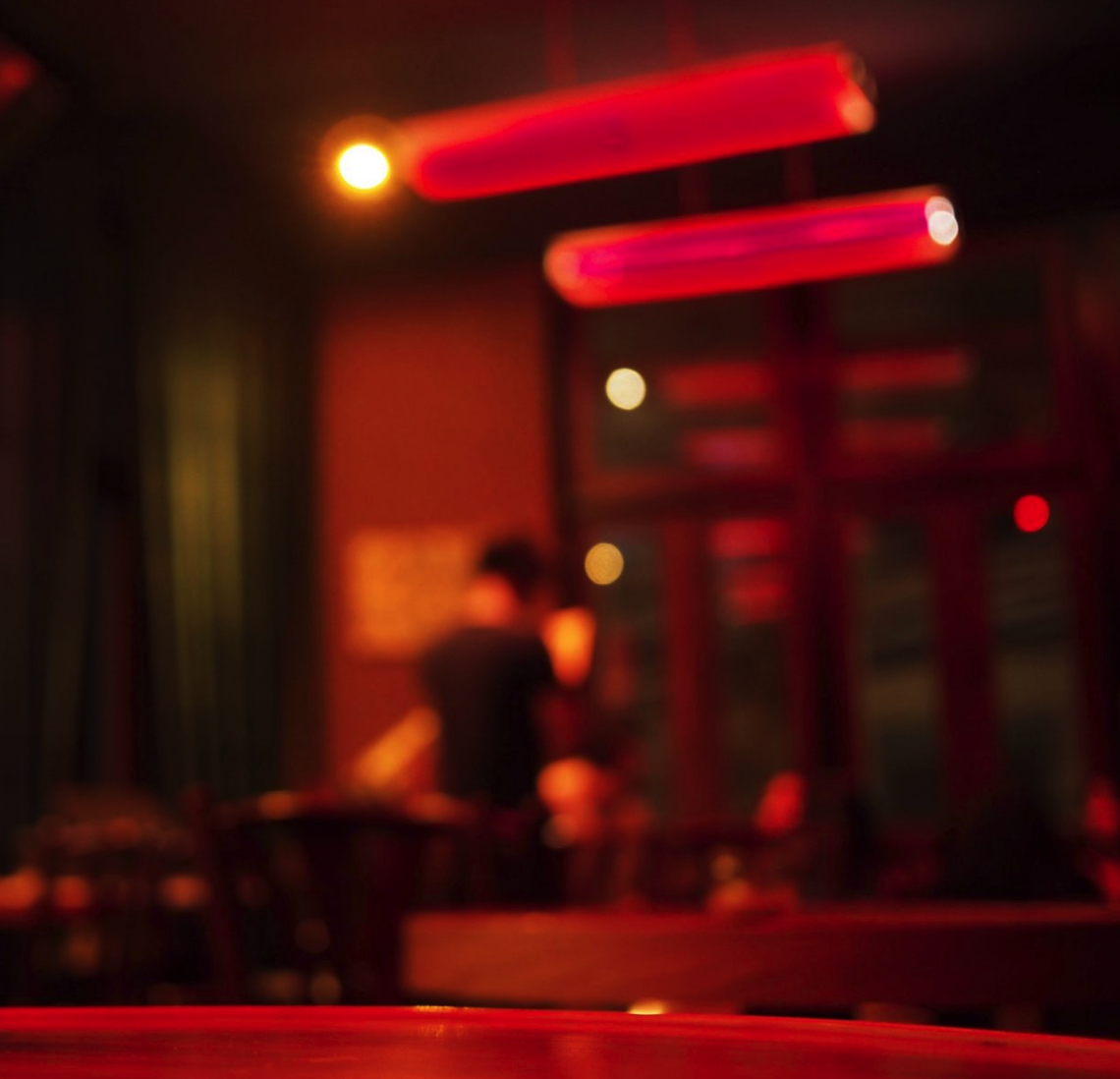 LANDLORD     What have you lost?

Chow Mo-wan and his colleague Zhou Bing at a restaurant.

In the past, the people with hearts owning secrets not wanting other people to know, do you know what they would do?

How would I know?

They went to the mountains to find a tree. Dig hole in a tree, then with secrets fill it, then mud to seal the hole. The secret will always hoard in the tree.

Why so difficult? Why not find a female human hair vent?

A person like me is a rectum. You're different just keeping everything in your heart.

What is this heartload of mine?

After work, it rains heavily outside on the rain-proof Su. Inside his house, she is searching for Chow's feelings.

In the film, her husband is seen only once: his back at a table, playing mahjong. Otherwise, he is said to be traveling. His wife is seen twice: her back and a green telephone, through an oval-shaped window. She is said to be working late. Other ways they appear: as disembodied voices in a doorway; imported rice cookers, handbags, boutique ties brought as gifts.

Hong Kong, 1962: Chow Mo-wan, a journalist, rents a room in a Shanghainese district of the city. He plans to live there with his wife, a hotel receptionist working a shift at the time of the move. On the same day, Su Li-zhen moves in next door. Su’s husband is away on a business trip, as he works for a Japanese company and is often abroad.

Both Chow and Su question their spouse's infidelity; together, they realize that their spouses are having an affair with each other. They plan to confront them but decide against it. Su wonders aloud how the affair might have begun. They re-enact what they imagine happened, taking on the role of the other’s spouse.

Chow invites Su to work with him on a martial-arts series that he is writing for the newspaper. As their neighbors begin to take notice of their friendship, Chow rents a hotel room for them to work in. A frequent motif is the consumption of noodles; they eat noodles separately at the beginning but Chow brings Su noodles when they are working. It is almost like they are in love.

After receiving a job offer overseas, Chow asks Su to go with him. He waits for her at the hotel room and then leaves. She can be seen rushing down the stairs of her apartment, only to arrive at the empty hotel room, too late to join Chow.

Four years later, Chow returns to his apartment in Singapore. He finds a lipstick-stained cigarette butt and realizes Su has been there. He remembers an old story of a way to unburden yourself of a secret.

Years later, in an unnamed temple, slackened trees drain a sky. In one trunk, a hole-shaped lull archiving junked regrets and other fibrous things. Inside the stairwell, a mattress is climbing and a man is descending. Two open doors signal that either two people are leaving, two people are arriving or one leaving and one arriving. Love too can be thought as coincidence of doors, as the mechanism which allows the possibility for a breach.

Who are they separated from their concealments? Maggie Cheung plays a woman with a husband in perpetual transit. Tony Leung, a watching neighbor, verdant and remote.

To historicize their loneliness would only further a representation of the individual governed mostly by debt. Consequently, relationships as loan repayment strategies. On any given day, Tony is telephoning his invisible wife––his mumbling heart a premature root slipped out of earth. Simultaneously, the clock’s thick stare wilts Maggie, who lives in plant-time.

While they consider themselves landlocked, circumstances allow occasional defections into minor pining. For instance, eyes emptying out into the same sewer or forgetful hands becoming adjacent. One night, she compliments his tie, which is identical to a tie her husband has received. When she orders a steak, he corrects her mustard usage, which is unlike his wife.

During a downpour, she discovers that Tony owns the only umbrella in the city. This is an adapted translation for global audiences, such is the Cantonese indifference to definite and indefinite articles.

She falls sick when they are working on his novel. She rests in his bed while he writes, but the next morning they are nervous about exiting the apartment together. In this state, everyone is watching except that no one is watching. It is not impossible they escape off-screen. In several bootleg versions, he begins to perfect the art of hiding behind doors. It is not inaccurate to say the story is about the modest protagonism of trees.

Tan Tuck Ming is an essayist and poet currently living in Iowa City, Iowa. Born in Singapore and raised in Aotearoa New Zealand, his current work is interested in the shifting structure of the family, especially in the context of displacement and migration. His work is published or forthcoming in Michigan Quarterly Review, Speculative Nonfiction, The Rumpus, and other publications.