When Mike Kelley strung thrift store rag dolls and stuffed animals from a canvas, he was mapping the territory of abuse. Each doll a tiny parcel holding the sweat and tears of their former owners. Bodies sewn head to toe, toe to head, between a scream of blanket. Like Rauschenberg’s Bed from a generation prior, More Love Hours Than Can Be Repaid (1987) unspools yellow tape around the scene, marks the spot where the victim anticipates nocturnal recurrence.

Sometimes I think of myself as one of Kelley’s plush familiars. A neon-blue bunny waving the world over for a tour of my abjections. Here the shirt-button eye that smells like nicotine. Here the shoelace lip tied with curses.

In studies of mothers raising children in the shadow of war, researchers find wave patterns, known as gamma oscillations, in the brain’s visceromotor cortex. The waves are neural markers for the toll chronic, unpredictable stress takes on the mothers’ social brain. On a behavioral level, the damage expresses itself as reduced attentiveness to the child’s welfare; reduced parent-child synchronicity.

My father was from a mining village in Canada with a cathedral rising from its center. When he cleaned his shoes on the US side of the border, he could still feel all that stone. The structure filled with gold while he and the rest of the village went hungry. Precepts poured into concrete, weighted to constrict the breath.

It was the stone I felt every night, waiting for him to come home. Car entering the driveway at an off-angle. Headlights lighting the opposite side of the yard. Bumper too close to the neighbor’s fence. Or if I wasn’t quick enough to watch from the rear bedroom: a heavy step on the porch, loud chiming, keys, curses. These were his tells.

Many nights I went to bed fully dressed. Others, I woke to pounding. Doors, dishes, the too-hot top of the TV. Those were the good times—the nights I was glad something else was being broken.

When my mother died, I remembered the last time she seemed alive.

Eight years ago. She tricks me into bringing her back for “one last look.” Forty-three seconds later, in front of the dented wall my father bequeathed, she shouts her purpose into the space between her hands. A space she refuses to vacate, even as she sees teeth sprouting from its walls.

I tell her she’s expected.

I tell her it’s Meatloaf Night.

ALL MY LIFE THIS IS WHAT YOU’VE DONE.

She is 50 years younger. And so am I, making a fist in my Tweety Bird mittens. When the medical transport comes to collect her, all that anger shoots to my extremities. I make a basket of my arms. Her body suddenly going slack, as if a light inside had blown out. I tighten my grip, expecting resistance as we descend each step. But she is still—a capsized boat, a fist of cheese, an armless doll abandoned at the curb. Her lips also still. The curses of a few moments ago receded back behind her tongue, replaced by a grin. Her eyes pinned above my shoulder, to the house she will never see again.

Chantal Akerman committed suicide two days before No Home Movie (2015) premiered in New York. No Home Movie is Akerman’s last film. It is made up of conversations with her mother, Natalia. Most are in-person; some virtual, all displaying a mutual love undiminished by circumstance. For me, who has seen most of Akerman’s work, it was nice to meet the woman who gave a 25-year-old the courage to create Jeanne Dielman, 23 quai du Commerce, 1080 Bruxelles (1975).

In No Home Movie’s final scene, Akerman ties her shoes in her mother’s empty apartment. When she exits through an adjoining room, the closing seconds fill with labored breathing. Sobs. The rattle of her own life ending. 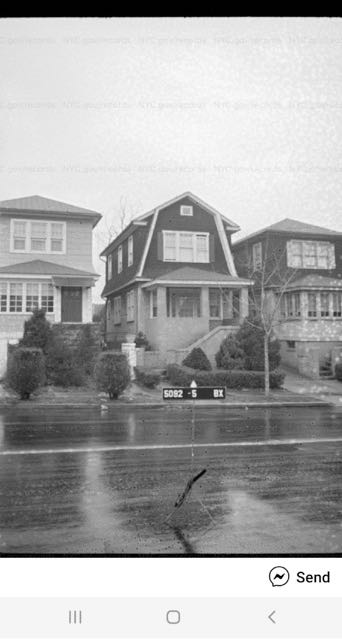 In our age, grief is given a decimal point.

No app to measure how far we were from each other when we were failing. Them, as parents. Me, as someone they’d love enough to be better versions of themselves.

My father holds the purse over his head, empties it on the rug. Lipstick. Compacts. Wallet. Papers. Knots of Kleenex. An unused tampon. Everything tumbling out, in a pile at his feet. “You vegetable bitch,” he shouts at the pile. And she laughs when he throws the empty sleeve of fake leather at her.

“You leave her alone,” I say with a wobble, as I raise the hammer to his skull. The hammer I used to put a padlock on my bedroom door.

My father looks up at me. There are seven inches between us. But he makes up the difference with his eyes. The hammer behind my head. My eyes bounce between the hammer and his skull. The top of his scalp shines.

I consider the good I could do. The hammer removing an unwanted wall, allowing us to see to the other side of the house.

My mother screams as my hand tenses around the chipped wood. It is the first—and last—time she saves me. A small hand grabs a fistful of shirt at my neck.

“Don’t ruin your life,” she says. The hammer gains 20, 50, 300 pounds each second it dangles at my ear. I feel myself shrinking, getting shorter, becoming the 7-year-old who’s holding the hammer. As I rest the scuffed face back on the dresser, I wonder if by saving me, my mother has taken something away. Perhaps furred, or with a wrist burn of metal.

My father died a few years later. When he didn’t beat me for what I’d done, I knew he wouldn’t live much longer. Years later the hammer I raised to his skull held open the bathroom window in my first apartment. I thought having a place of my own would make a difference. But I never stopped waiting for him. On warm nights, my head pressed to the tiles, trying to feel the breeze at my cheek.

William Lessard has writing that has appeared or is forthcoming in American Poetry Review, Best American Experimental Writing, and the Southwest Review. He is Poetry & Hybrids editor at Heavy Feather Review.