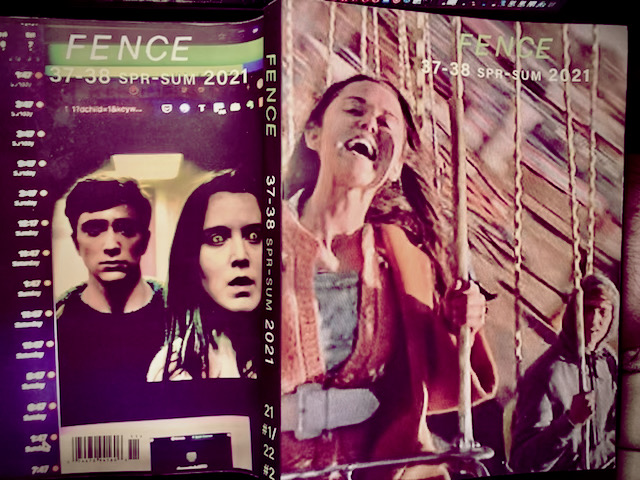 I am a rabid fan of “rotters,” or as more politely called on the BBC show In the Flesh, those with “Partially Deceased Syndrome.” In the Flesh is a show you must see, streaming everywhere—a deeply profound, witty, and ultimately deadly serious work of literary art and performance that takes on what life itself is and means, twisting our repression of death.  Above all, In the Flesh is a necessary inoculation to suicide, a meditation on the subject of suicide like none other could be, deploying genre lightly in order to, among many other things, bring a boy back to life, back home, to see the consequences of his suicide to his family. In the show, you will find deep catharsis and healing accompanied by hatred and murderous bigotry to the point of the resettled having to fear for their afterlives.

The show, brilliantly written by Dominic Mitchell, is given robust life by Emily Bevan (Amy Dyer) and Luke Newberry (Kieren Walker). Newberry was nominated for a BAFTA for his performance. The show grew to become a massive hit in the UK in the mid 20-teens. Fansites still populate the internet, including fan art and fan fiction, some included in the following pages. Not only, I happily proclaim it to be, one of the great works of art of the 21st century, In the Flesh has no doubt saved many lives – outsiders, queers, artists, the introverted, all struggling through young adulthood. This is why, I believe, the show is so necessary for you to watch, especially if any of those categories apply to you now or did in the past---if you feel or have felt like you are not a part of the storyline. You create a story by risking life and determining your own identity.

The setting:  After “The Rising”--in which those who died during one specific year rose up as zombies--the British (we only see the UK view) Military and Government has finally rounded up all the non-contagious mindless violent brain eaters (oh how we desire that which we do not have ourselves). Those who had rampaged now remember themselves, return to being themselves, as the National Health Service begins administering not a vaccine but a daily injection of a substance that rebuilds an individual's nerve connections.

There is no cure, but there is maintenance, to be taken indefinitely. The mega-pharmaceutical company that has developed the drug has designed cheery flyers and kits to be distributed and administered, and now the government is in the process of resettling the Partially Deceased back into their home communities.

There is a deep historical irony – the lauded scientists who have discovered the nerve-healing serum are named for the director (Victor Halperin) and writer (Garnet Weston) of White Zombie (1932) which (I’ve seen it, it’s ok if you don’t) only hints at the spread of the “zombi” lore by slaveholders in the Caribbean who used the notion that they could raise the dead and fully control the reanimated to prevent slaves from taking the last liberty of suicide, fearing a state of even less liberty and greater despair and control. With In the Flesh, the connection between the reanimated and suicide comes full circle.

In the cave where Kieran originally cut his wrists, he is found by his mother, Sue Walker, played by the amazing Marie Critchley. Luke Newberry confirmed to me that the scene was shot in an actual cave, the whole crew crowded in together amid the damp cool scent and rough surfaces. As he is crouched against one wall of the compact tunnel is what I find to be the most astonishing moment – Luke Newberry’s simple delivery of the line “You want me to stay?” --- still not fully believing, but reaching for hope and love as his mother sits across from him in the dark. Her response set me off bawling and sobbing.

After watching the show I took a walk, crying, each step an affirmation of me, of you, of everyone. That is what literature should be able to do. To do so with exquisite beauty, intricacy, and imagination, as In the Flesh accomplishes.

3) An excerpt from Emily Bevan’s (who plays Amy Dyer) memoir The Diary of Losing Dad, which tells of her experience playing one Partially Deceased as her father lay dying in a nearby hospital (scroll down for more info!)

4) a sampling of fan art

5) a snippet from a conversation between myself and Luke Newberry about language, memorization, embodied speech, and other matters.

Dedicated to LE, JSZ, CB, SB, FB, & EB and all who have been touched by untimely loss. 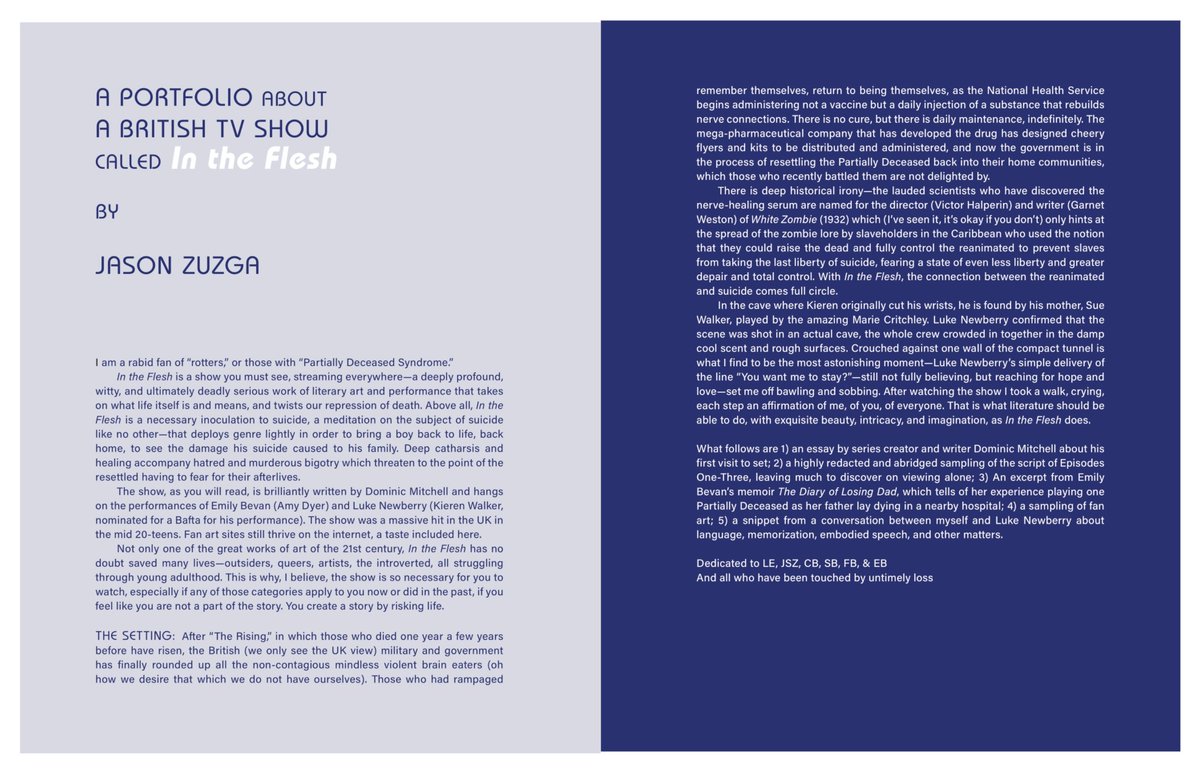 The multitalented Emily Bevan, whose generous and poignant portrayal of Amy is so essential to the show, has written a memoir based on her diary kept before, while, and after filming the second season of the series. An excerpt is included in the print edition. Another excerpt can be found here: https://unbound.com/books/diary/excerpt and more info about the book here: https://unbound.com/books/diary/.

To all artists of fan art included in the issue - if you recognize your work in the issue as included in the image below, selected after exhaustive decisions and diving through the Pinterests of the internet, please contact us so that we may credit you here and add a full-color version of your work in a gallery of In the Flesh art we hope will grow and expand over time. 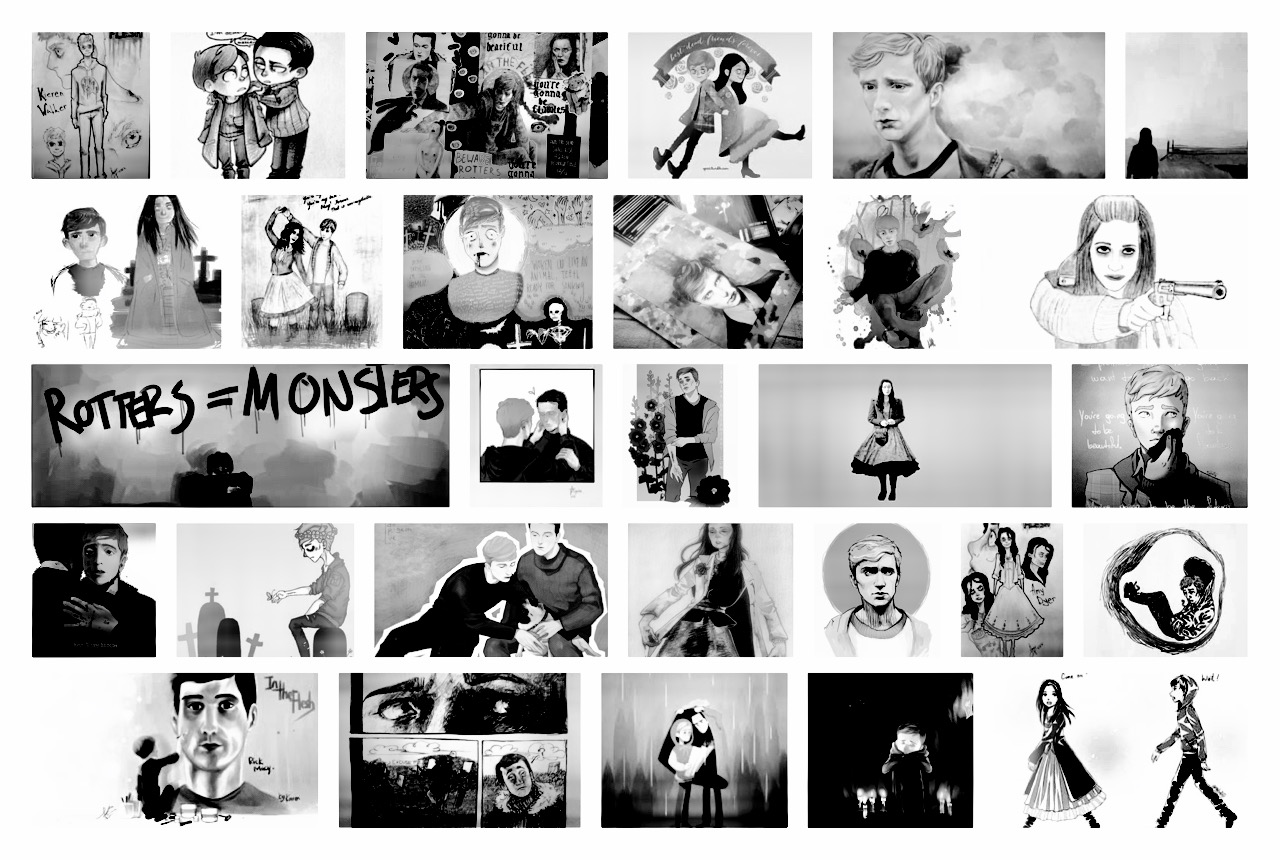