Until the body feels something different, it cannot act differently.—Deane Juhan 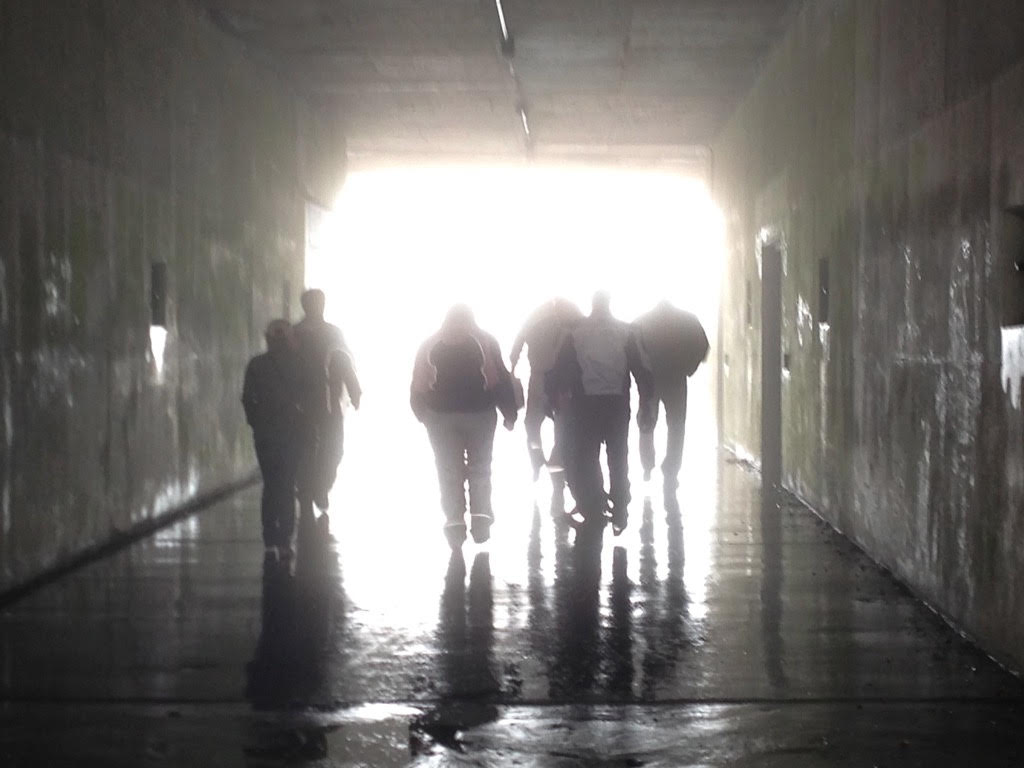 The wall is four and a half feet thick. I meant to begin: Speaking of violence . . . And I would write about these tunnels. A tunnel allows a silence to be broken.  I’ve entered these as entering caves, whispering. Instead, I retreat, and borrow from Notes on the Underground (Rosalind Williams), which begins, “The drive to modify the natural or given environment so that it will be safer . . . old as humankind.”

Colonel in the U.S. Army greets me one morning. He enlisted in 1984, knows the “armpits of war." I sidestep to our view—Marin Headlands, Pacific Ocean. “In Afghanistan, there was hardship. I was engaged with the terrain, we had to move supplies through it, the view of the mountains there was enough,” he says. This view, “a place where I should feel, . . . oddly uncomfortable.” 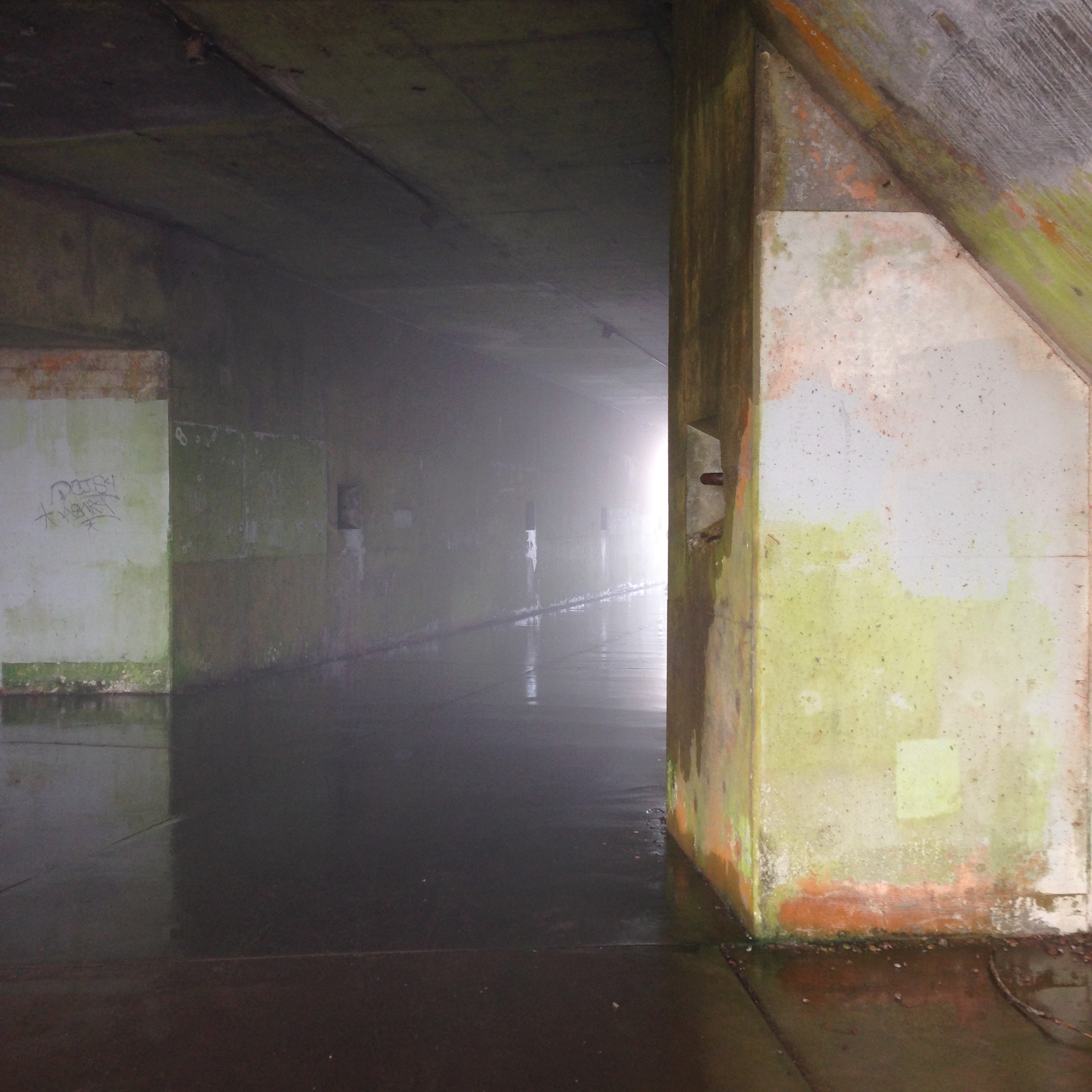 I meet Derek, CAL graduate, former intelligence sergeant, U.S. Army special forces, on the road. One of his group is carrying a pole with an American flag. I am afraid, have arranged my antiwar values to be certain and clean.

But violence is present anyway. For company, I approach a woman in the group. She directs me to him.

Battery 129, where I stop each time I visit my writing studio at Headlands Center for the Arts, “was built to destroy humans,” Derek says, the landscape "a chokepoint." But "once you are in combat . . .

In conditioned deafness, I photograph the light on the rusted gun pit, flirting with volume and the scaled-up vocabulary of war. Others use the site for fashion photo shoots. One day, it's a set for Terminator Genesis. Arnold Schwarzenegger saves us from evil, and the paint is washed off the tunnels the next morning.

I consume violence ordered on the page. A dozen war books rest my restlessness—the stability of text as events become unstable and unintelligible,
I go off course,
feel
—arrives a biological point of view, morphogenetic capability,
neglect it.

"The only statement I feel comfortable making is 'I make cups'," says Ehren Tool, potter and ex-Marine from the first Gulf War. He listens to veterans' war experiences and makes a cup for each person that includes part of their story. "The cups can be starting points . . . ," he hopes. Tens of thousands of cups. One was passed around. A woman like me said she could never drink from it.

I am mapping muteness with fragments—
not articulating the full catastrophe of silence,
diffusion repeating distance.

Derek, I like him, is a specialist in analyzing body language and speech patterns. “You’re genuine,” he says, “or your speech suggests you are."

My caring is present and absent—a stand-off against what I allow to touch or not touch my skin. I dominate what can reach me.

I can disallow hearing—to keep inside and outside separate and not stir the peripheral sensations.

Or, wait for orders, the civility of sequence—a snowdrop and then only later a primrose.

A body off line. Locked against disturbance.

Making for a volatile consciousness, trains of action cut short, a confused text, and yet seemingly a necessary text—to associate feeling with response by writing something on paper.

Derek's civilian group started at 9 p.m., the previous evening, forty miles, twenty-five hours, sleep, fifty-pound packs, little food, cold surf—the Go Tuck  Heavy challenge, to "make better Americans." He thanks me for my effort at understanding. "Courage is not nothing."

I go the distance until my eye declines, prefers to shelter a familiar powerlessness. I tidy my corner, "a haven that ensures us one of the things we prize most highly—immobility. It is the sure place" (Bachelard). 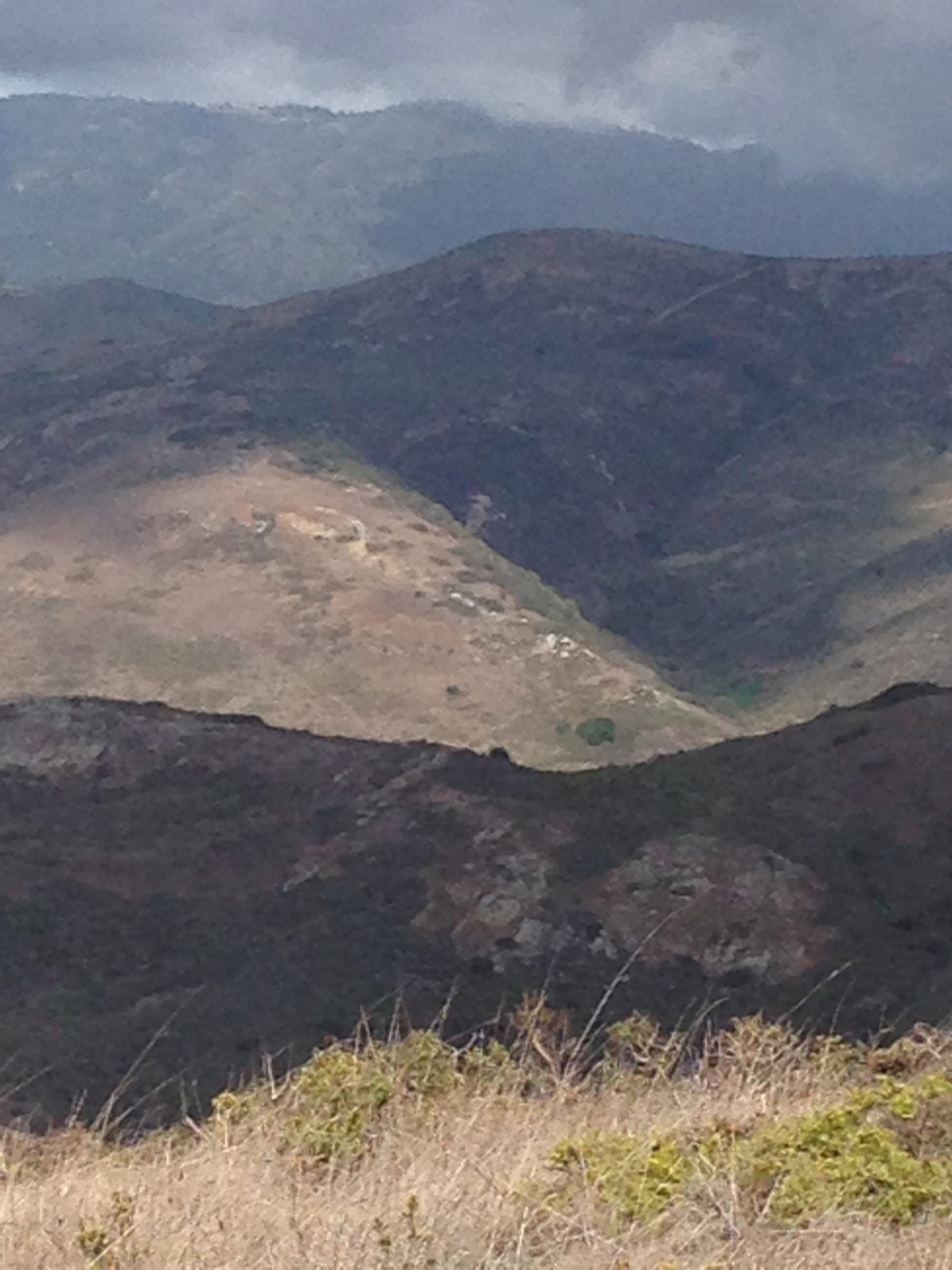 Bare end of a year arrives suddenly, Porta-Toilet doors banging in the wind, tunnels frigid. Landscape raw with consequences—too late now that each rain counts, each instance of erosion. This is a space that is going backward, into itself, for a very strong confrontation.

I am the white adoptive mother of J, a young black man. I have loved him for twenty-three years.

He was eleven, when I had to tell him Oscar Grant was killed by transit police nearby. Later, on his newsfeed, the dead body of Michael Brown on the street for four hours, his mother behind police tape—

—I delay undressing for bed, gambling with a knock on the door

Rage breaks—
I hate and I weep. I crave a strong muscular motion. I itch. I kick at the world, I must articulate—I will insist

I will go off guard, write this,
—although whiteness trained not to recognize and integrate itself,
in that peril—
how

“You think I’m a killing machine, don't you?” a Marine interrupts.

will I know
reach—
fast enough

a white person is the danger.

The ungrieved grows strongly now outside the body, on a verge.

I write it as a fruit harvested without efficiency. I mean to hand on to the page something ripe, too ripe, even as it skins us.

Withholding was the manners of my British whiteness—

Excuse me, reader. I wasn’t open to you.

I am dragging now from a British river a shape—
into the verge pile,
excavating a mud bank of clogged speech, as in Derek’s “Veterans know something, I love talking about it.”

Not self-sufficiency but flood, toward a turning to, back into, the world. To write something better than this.

This work is from the beginning of a new manuscript provisionally titled What's Not the Same as a Purchase? which investigates the dimensions of systemic violence, especially the violence of whiteness. Hazel White is the author of Peril as Architectural Enrichment (Kelsey St Press 2011) and Vigilance Is No Orchard (Nightboat Books 2018). She's a recipient of a California Creative Work Fund grant, and an affiliate artist at Headlands Center for the Arts. You can learn more about Hazel's work at hazelwhite.com.